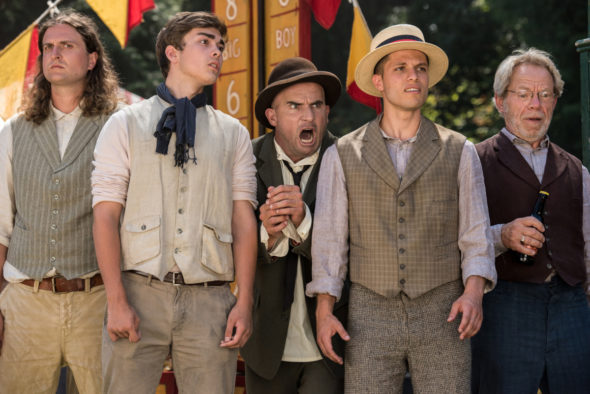 Are the Legends out of time? Has DC’s Legends of Tomorrow TV show been cancelled or renewed for a fourth season on The CW? The television vulture is watching all the latest cancellation and renewal news, so this page is the place to track the status of DC’s Legends of Tomorrow, season four. Bookmark it, or subscribe for the latest updates. Remember, the television vulture is watching your shows. Are you?

Airing on The CW television network, DC’s Legends of Tomorrow stars Victor Garber, Brandon Routh, Caity Lotz, Franz Drameh, Arthur Darvill, Amy Pemberton, Dominic Purcell, Wentworth Miller, Maisie Richardson-Sellers, Nick Zano, Tala Ashe, and Neal McDonough. Thanks to fracturing the timeline, in season three, the Legends must restore all the anachronisms to their rightful timelines, before the time stream falls apart. However, Rip Hunter (Darvill) and the Time Bureau prompt them to disband, until Sara (Lotz) gets the band back together.


What do you think? Are you glad that the DC’s Legends of Tomorrow TV show has been renewed for a fourth season? How would you feel if The CW had cancelled this TV series, instead?

I think that it would also be good if they did a Fourth Season of Legends of Tomorrow because I quite liked the show and at the same time I own the first three seasons of the show as well !