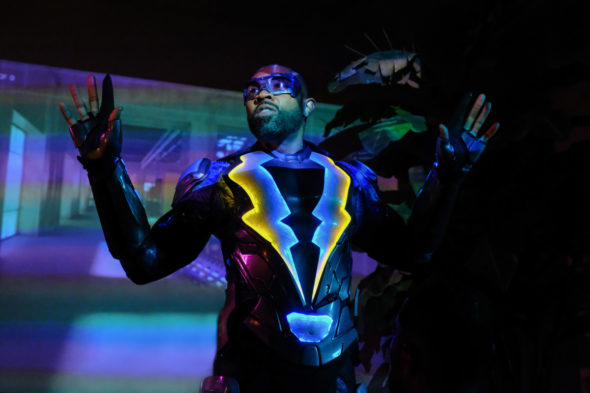 Are fans in for a jolt? Has the Black Lightning TV show been cancelled or renewed for a second season on The CW? The television vulture is watching all the latest cancellation and renewal news, so this page is the place to track the status of Black Lightning, season two. Bookmark it, or subscribe for the latest updates. Remember, the television vulture is watching your shows. Are you?

Airing on The CW television network, Black Lightning stars Cress Williams, Nafessa Williams, China Anne McClain, James Remar, Damon Gupton, Christine Adams, and Marvin Jones III. The DC Comics superhero drama centers on Jefferson Pierce (Cress Williams). While he once waged a vigilante war against crime — using the masked persona “Black Lightning”— Pierce retired years ago and now serves as the principal of a charter high school. Crime and corruption are running amok, now that The One Hundred — a dangerous gang — has the city it is grasp. Endowed with the amazing ability to harness and control electricity, Black Lightning jumps back into action. Now the community stands a fighting chance, but at what cost to his family?

The first season of Black Lightning averaged a 0.56 rating in the 18-49 demographic and 1.73 million viewers. Learn how Black Lightning stacks up against the other CW TV shows.

What do you think? Are you glad that the Black Lightning TV show has been renewed for season two? How would you feel if The CW had cancelled this TV series, instead?

Correction.. Are tired and done. Teen flicks was an 80’s thing.

Love the show. I think people just hate what it stands for. Riverdale and other teen flicks or tired and done.

Thank you for season two I can’t wait. Really good show. I can finally watch a good show other then the flash.

Great show!! Thank u for renewing!!

Keep Black Lightning the other cw super hero shows are boring and all look alike.

Ditto, Cancel it and burn all digital copies, I don’t want my kids or their kids and so on to even know this existed as a freebie pirate on youtube.