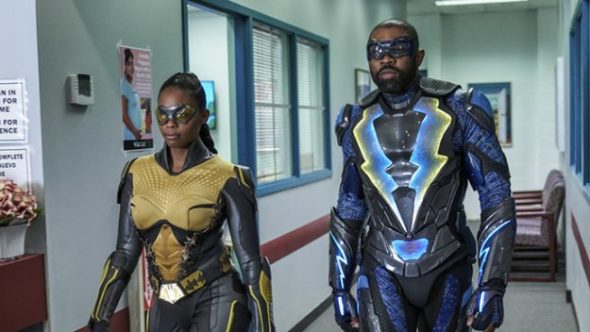 Jefferson Pierce won’t be retiring his superhero persona anytime soon. The CW has renewed the Black Lightning TV show for season three which will air as part of the 2019-20 broadcast season.

Based on the DC Comics character created by Tony Isabella with Trevor Von Eeden, Black Lightning stars Cress Williams, Nafessa Williams, China Anne McClain, James Remar, Damon Gupton, Christine Adams, and Marvin Jones III. The CW superhero drama centers on Jefferson Pierce (Cress Williams). While he once waged a vigilante war against crime — using the masked persona “Black Lightning”— Pierce retired years ago and now serves as the principal of a charter high school. Endowed with the amazing ability to harness and control electricity, Black Lightning jumped back into action when his city was overrun with crime and corruption. Now it stands a fighting chance, but at what cost to his family?

Currently in its second season, Black Lightning is averaging a 0.32 rating in the 18-49 demographic and 1.01 million viewers. Compared to season one, it is down by 42% and 41%, respectively. Given the network’s focus on DC superhero shows, it seemed likely that this one would be renewed with the rest.

Today, The CW also announced that nine other TV shows had been renewed for the 2019-20 season: Arrow, Charmed, DC’s Legends of Tomorrow, Dynasty, The Flash, Legacies, Riverdale, Supergirl, and Supernatural. The fates of All American and Roswell, New Mexico have yet to be announced.

What do you think? Do you like the Black Lightning TV show on The CW? Are you glad that it’s been renewed for a third season?

I love the show glad it was renewed

Can’t believe this show is still on. Acting is terrible. Please free up time slot for a good show with experienced actors.

I love the show glad it was renewed

Love this show because there aren’t many Black superheroes on tv,

I love this show, can’t wait to see Season 3. When will it air. It’s not a dull moment. It holds my attention very well. You won’t be disappointed in this show.

I love the show, I’m happy that is has been renewed. When is the premier of season 3? I cant wait.

I am delighted that Black Lightning continues to air for subsequent seasons. It is my favorite all-time show on television to date.

I’m very happy that Black Lightning has been renewed. I was not able to find when Black Lightning aired on CW. The show time and day was moved. I hope that they will stop moving around. I really like Black Lightning. If I watch on Hulu or Netflix will it make the Nielsen rating? I often watch commercial free.