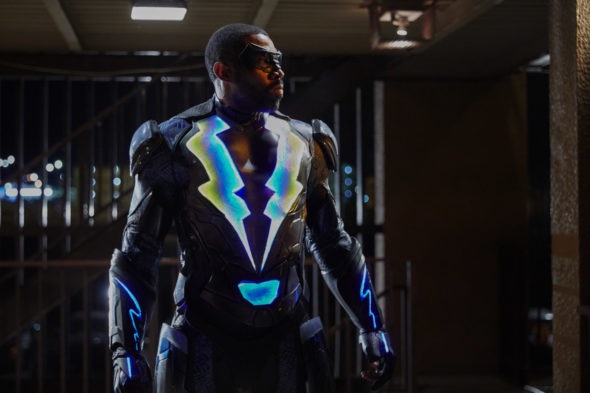 TV show description:
A live-action superhero drama based on the DC Comics character created by Tony Isabella with Trevor Von Eeden, the Black Lightning TV show centers on Jefferson Pierce (Cress Williams). While he once waged a vigilante war against crime — using the masked persona “Black Lightning” — he now gives back through his work at a charter high school.

Although the school is located in a neighborhood plagued by gang violence, it serves as a refuge for the embattled residents. To them, Principal Pierson is already a hero. As the father of two young women, Anissa (Nafessa Williams) and Jennifer (China Anne McClain), Jefferson is content to keep the past in the past.

Crime and corruption are running amok, now that The One Hundred — a dangerous gang — has the city in its grasp. Because Pierce still remembers how his family suffered during his crime-fighting days, he is loath to return to them, but things are getting out of control.

Endowed with the amazing ability to harness and control electricity, Black Lightning is a fierce, formidable foe. Now that he is back in action, his city stands a fighting chance, but is his family in more danger? Stay tuned.

Series Finale:
Episode #58 — The Book of Resurrection: Chapter Two: Closure
After four seasons, the game-changing, relevant and electrifying series comes to an end. The episode was written by Charles D. Holland and directed by Salim Akil.
First aired: May 24, 2021.

What do you think? Do you like the Black Lightning TV series? Should The CW TV show have ended or been renewed for a fifth season?

Season four was absolutely horrible. My problem with it has to do with Black Lightning and how he came off being so weak. Always complaining like a young child. Never relaxed ready to think through the things that need to be thought through so that he could accomplish what he needs to accomplish. This is supposed to be an adult superhero and all he did was complain. Took forever to get to a place where he decided to use the suit again. This is just resistance to what you know would be a better experience to do or utilize. So… Read more »

Hey, guys! Here’s a petition to sign up on.
https://www.change.org/p/cw-save-black-lightning
Let me know if you’ve signed up on it, OK?

It’s exciting to watch on Monday’s.

Black Lightning will end after four seasons by The CW.

This is a great show it should not be cancelled it is one of the best tv shows on television. What could be done at this point to keep it if anything?

I really like the series Black Lightening! A lot of the episodes pertain to what’s going on in the world- metaphorically!

yes, I liked the show.

Black Lightning is by far one of the Best T.V. shows I’ve seen, I’ve been binge watching since covid19, I watch about 8 episodes a day, I watched the last episode today, I need and want more Please !!!!!