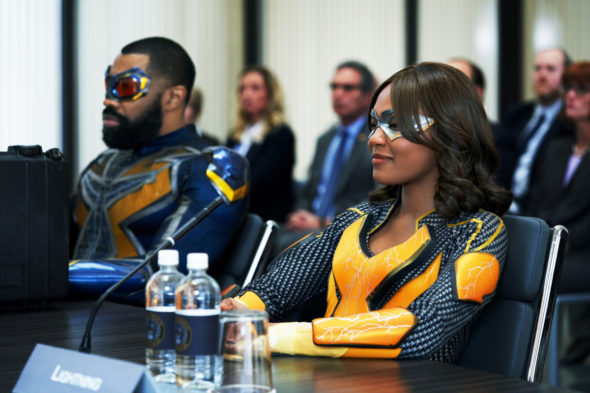 There’s a power outage in the Arrowverse. The CW has confirmed that the Black Lightning TV series will end with its upcoming fourth season. The final season kicks off on Monday, February 8th. It hasn’t been announced how many episodes have been ordered this time around but the past two seasons have had 16 installments each.

Though Black Lightning is on its way out, a Painkiller spin-off series, starring Jordan Calloway, is still a possibility. A backdoor pilot for the spin-off will air as part of Lightning’s fourth season.

Of the show’s coming to an end, Black Lightning showrunner Salim Akil said in a statement:

“When we first started the Black Lighting journey, I knew that Jefferson Pierce and his family of powerful Black women would be a unique addition to the superhero genre,” The love that Blerds and all comic book fans around the globe have shown this series over the past three seasons proved what we imagined: Black people want to see themselves in all their complexities.”

“Thank you to the phenomenal cast, writers, and crew without whom none of this would’ve been possible. I’m incredibly proud of the work we’ve been able to do and the moments we’ve been able to create in bringing DC’s first African-American family of superheroes to life for the culture.”

“I’m very grateful to Peter Roth, Warner Bros. TV, Mark Pedowitz, The CW Network, and Greg Berlanti for their partnership and support of my vision at every step of this journey. While Season Four may be the end of one journey, I’m extremely excited to usher in a new chapter and continued collaboration with The CW as we tell the story of Painkiller.”

Supergirl is also ending this season so, that will leave Batwoman, DC’s Legends of Tomorrow, The Flash, DC’s Stargirl, and Superman & Lois as Arrowverse shows on The CW.

What do you think? Have you enjoyed watching the Black Lightning TV series? Are you sorry that there won’t be a fifth season of this show on The CW?

Love Black Lightning – very sad to see it go. Every character arc on that program is fascinating and compelling. It deserves a lot more love.

Supergirl and black lightning not into a lot of there shows on The Cw hooked Titans on hbo max streaming app dc comics so good season 2 on there.

I have not been on-board with the prior premature cancellation of Arrow. And now Supergirl etcetera. I was fully vested in watching all, (which includes Black Lighting!!) So, when does this relentless purging of Arrowverse series from the CW end??! No pun intended!!!

Lose interest with arrow so good and The Flash is my favorite show of all time. I heard making spin-off Black lightning something else never got into it.

Sad CW that you have decided to end Black Lighting one of the best African American shows out not to mention that we need more shows like this. Sad to see the show leaving and CW will no longer receive any ratings from my household

I still can’t believe that the fourth season of Black Lightning will be the last one. I still hope that Painkiller will get the green light to become the newest CW series.

I doubt this is about raitings. If CW ( no idea how they earn money for it ) relied on raiitngs all their shows should be ended 5 years ago.

I guess they are replacing it with Painkiller spin-off

I guess old people want to watch police dramas all the time, and not excellent CW programs. THIS old bird loves the superhero shows.

I really don’t think they are ending show because of raitings. If CW was basing on raitings of their App ( i guess this site bases on viewers of actual CW app only ) they would finish Arrow about 4 years ago, Supergirl would end 3 years ago. Also truth is i am glad they are ending the show, not just finisish last season on cliffhanger and just leave unwrapped story. Because this is how shows like Smallville ( if don’t count sequel S11 comics ), Agent Carter, Netflix MCU, Constantine and Swamp Thing have finished. Unwrapped story after cliffhanger… Read more »

I only watched some of season 1 because I felt like they were going too quickly towards focusing on the girls getting their powers without even telling how Jefferson got his powers. He’s Black Lightning and they were already pushing him to the back. I wanted to learn more about him first. So I quit watching for a while. But why end the entire series so soon? That doesn’t make sense.

There are other channels, you know.

How the hell they ended Arrow, Supergirl and Black Lightning while Legends and Batwoman are on air ?

Ahh i remember. Warner Brothers are most SJW company since they cancel Hartley for dumb old tweets or dump on J. Deep.

I agree I stopped watching The Flash because of the Hartley situation.