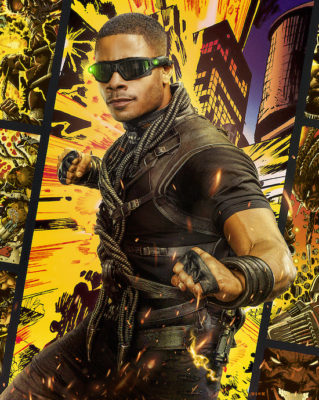 Black Lightning fans are in for something special. Deadline reports The CW is developing a spin-off based on the TV show’s character Painkiller.

The CW‘s Black Lightning potential spin-off will center on the character Painkiller (Jordan Calloway), a man with a violent past looking for a peaceful future. The network is developing a backdoor pilot for the series, which will air as the seventh episode of Black Lightning‘s upcoming fourth season.

The new season of Black Lightning is expected to premiere in February 2021.

What do you think? Do you watch Black Lightning? Would you watch a Painkiller spin-off?

Good news need to end tired of it,

I will watch both Black Lightning and the new Painkiller when the new CW series. I want to see how the writer developed the character .supportinng cast and the rogue gallery.

Yes I would watch the spin-off and as long as it’s good and doesn’t get milked dry like amc is doing/did with twd (yes I’m a fan of that show) but yeah I’d watch painkiller like I watch black lighting! I like these type of shows because in some way or another you can relate to that character irl, I’m pretty sure mostly every person can relate to the characters in this show and what happen to them in their past and present! Also if anyone reads this I hope that you have a wonderful week and stay safe and… Read more »

Black Lightning is a good show… I’d give the spinoff show Painkiller a try. I liked the character on the show……

Yes I know the spin-off would definitely be interesting

It could definitely be good. It sounds like they are going the ‘antihero’ route. In any case, I’ll give it a look.

He’s gorgeous, so the answer is yes. Batwoman is shaky, at best, and Legends won’t go past this year. Two openings. Swamp Thing will be a definite contender.