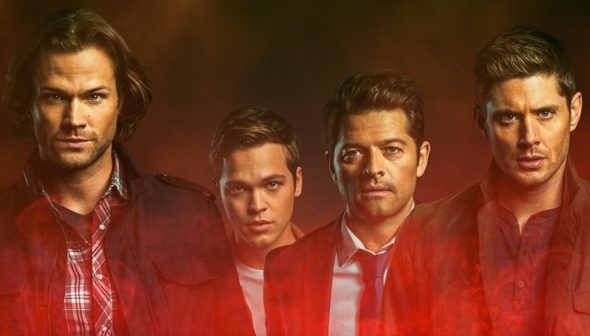 Airing on The CW television network, the Supernatural TV show stars Jared Padalecki, Jensen Ackles, Misha Collins, and Alexander Calvert. Guests in the final season include Jake Abel, Ruth Connell, David Haydn-Jones, Osric Chau, Shoshannah Stern, and Christian Kane. The series follows the Winchester brothers — Sam (Padalecki) and Dean (Ackles) — as they cross the lonely and mysterious back roads of the country in their 1967 Chevy Impala. Joined by their angel friend Castiel (Collins), they hunt down the evil supernatural forces they encounter along the way. In season 15, Sam and Dean find themselves facing a threat beyond anything they’ve ever grappled with or ever imagined — God himself.

Find out how Supernatural stacks up against other The CW TV shows.

We already know that Supernatural is ending so we won’t expect a last-minute 16th season renewal. There have been hints, however, that the Winchesters could return someday so I’ll still keep an eye on the ratings and update this page with breaking developments. Subscribe for free alerts on Supernatural cancellation or renewal news.

What do you think? Would you have watched a 16th season of the  Supernatural TV show? Do you think Sam and Dean will return someday?

Why I love this show the show mase go on

I absolutely would watch a 16th season of Supernatural!! Please continue the Winchesters!!!

Mabe chuck will listen my pray and make me happy and do some miracle !!!

Supernatural hooked me from day one. I’ve been watching since the beginning. My husband caught an episode here and there and now we’re binge watching it on Netflix. We would both love to see new episodes.

A new season of Supernatural is necessary. In a time like we are living in a pandemic, the entertainment, suspense and love of two brothers against the greatest forces in the universe becomes a necessity. or not? All for one season 16

Love my DEAN & SAM TIME,SHOW.THEY WILL BE GREATLY MISSED IN MY DAYS. I WILLLOVE IT ALWAYS & WATCH RERUNSMs
Love ya,
Ms.Dallas
From ohio
L

I would have watched season 16 and season 116. I love this show.

there’s not the be a season 16 of supernatural the show as end but i do hope that there well a other great show taking it’s place,,