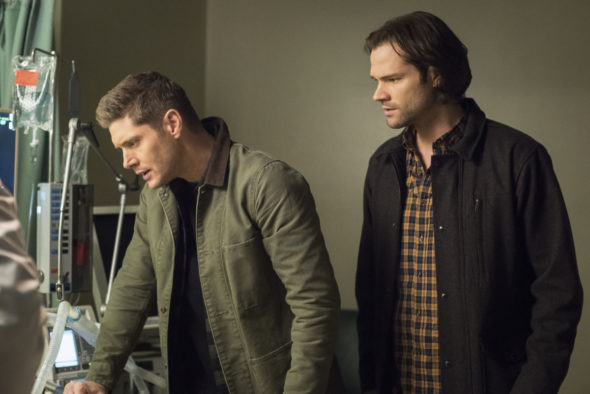 Sam and Dean’s work appears to be far from done. The CW has renewed their oldest series, Supernatural, for a 15th season.

A CW paranormal horror drama, season 14 of Supernatural stars Jared Padaldecki as Sam Winchester and Jensen Ackles as both Dean Winchester and the latest incarnation of the archangel Michael. The cast also includes Misha Collins as Castiel and Alexander Calvert as Jack. This year, guest stars include Jim Beaver, Kim Rhodes, Ruth Connell, Briana Buckmaster, Kathryn Newton, Katherine Ramdeen, Clark Blacko, Yadira Guevara-Prip, Samantha Smith, Amanda Tapping, Danneel Ackles, and Felicia Day. Supernatural season 14 kicked off with Sam recruiting everyone to help him track down Dean, and since he’s possessed by Michael, he could be anywhere. Meanwhile, Castiel meets with an unreliable source and finds himself in trouble, and Jack is trying to cope as a human, since his grace was drained last season.

The 14th season of Supernatural is averaging a 0.42 rating in the 18-49 demographic and 1.46 million viewers. Compared to season 13, that’s down by 23% and 13%, respectively. Despite the fact that the show’s been around since 2005, it’s still one of The CW’s highest-rated shows. It’ll keep going until the boys want to stop.

Today, The CW also announced that nine other TV shows had been renewed for the 2019-20 season: Arrow, Black Lightning, Charmed, DC’s Legends of Tomorrow, Dynasty, The Flash, Legacies, Riverdale, and Supergirl. The fates of All American and Roswell, New Mexico have yet to be announced.

What do you think? Do you like the Supernatural TV show on The CW? Are you glad that this series has been renewed for a 15th season?

Supernatural is the best show on the network! Can’t get enough of the guys doing whatever it takes to “save the world”. Hey somebody’s gotta do it why not Dean and Sam and Castle. Love the reruns too, only problem is that Season 14, can’t find it anywhere as a rerun. I’ve gone through every season 1 – 13 this summer and enjoyed every episode. Never get tired to the adventures. Sure would like to see Season 14 in it’s entirety before Season 15 begins.

The death of Supernatural will be like my own children dying

I am delighted that Supernatural will be on for a 15th Season. Love the Delicious Duo and this series. Its my favorite show on TV. The CW won’t be the same without Supernatural in 2021. How I looked forward every week to watch this show. Glad I have the CDs. Love you guys. Hope to meet you one day .

I am delighted that Supernatural will be doing a 15th Season. Just love the Delicious Duo and the series. The CW wont be the same without Supernatural in 2021.

Hell yeah I’m glad . I wish Supernatural could go on forever! My favorite show by far. Great work guys! What will I have to look forward to now?

Please don’t cancel or abandon the story! It’s still relevant! We still hang on to each episode waiting for the next. I binge watched 12 seasons to catch up when I retired. Loving each show! Since then, I’ve watched attentively! I love when you give us special episodes like, the boys having dinner with Mary and John. Love it most of all when Jeffery Dean Morgan comes back to visit ❤️. This could easily go forward! There’s so much more to explore… bring back Crowley! The show has the very best supporting team on television! Such a Fan!!!

You guys said ratings were down, but Supernatural is still in top three of CW. I would keep a sure thing show on while trying other shows. Supernatural still has higher rating than Riverdale, Arrow.Roswell,Dark and Supergirl. Why end show:)

This show should keep going on!! It’s been getting much better the longer it’s on !! If the writers can’t come up with different scripts, get new ones!!!

Supernatural is the Best. Looking forward to season 15 with anxiety and excitement! Will surely miss my Winchester Bros. Haven’t missed an episode from the beginning. Love you guys and Bobby!!& Cas.!

Love supernatural the series is awesome i hope it keeps going …..please don’t cancel this series…

Hope it never gets cancelled….really weird and catches the imagination Big Time!!