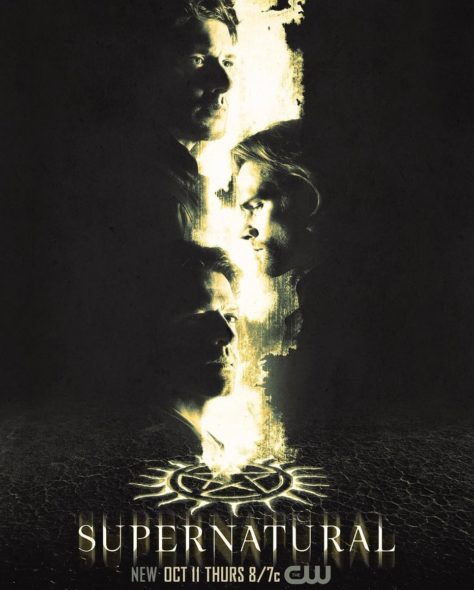 Are the Winchester brothers and their black Chevy Impala still racing down the road at full throttle, or are they running out of gas during the 14th season of the Supernatural TV show on The CW? As we all know, the Nielsen ratings typically play a big role in determining whether a TV show like Supernatural is cancelled or renewed for season 15. Unfortunately, most of us do not live in Nielsen households. Because many viewers feel frustration when their viewing habits and opinions aren’t considered, we’d like to offer you the chance to rate all the Supernatural season 14 episodes here. **Status update below.

Supernatural season 14 kicks off with Sam recruiting everyone to help him track down Dean, and since he’s possessed by Michael, he could be anywhere. Meanwhile, Castiel meets with an unreliable source and finds himself in trouble, and Jack is trying to cope as a human, since his grace was drained last season..

What do you think? Which season 14 episodes of the Supernatural TV series do you rate as heavenly, hellish, or rather mundane? Should The CW cancel or renew Supernatural for a 15th season? Don’t forget to vote, and share your thoughts, below.

I would love to watch more of Gotham, it’s the best Tv series ever

I love supernatural.. I’ve watched from the beginning and I still watch the rerun daily airings.. sad to see my menses go but I understand.. I hope Dean finally get the family he’s always wanted and settle down in the family life…and Sam goes back to school and become a lawyer.. that would be an Awesome ending!!!!

Love the boys since the pilot, of course like any person there are some characters I could do without. Such a bummer the show is ending. I don’t know if by actors choices or the station. Believe me fans would never tire even if they were old men teaching a hunters’ school. I liked Gen so much better as Ruby. If the actors decided to end the show I can completely understand. I have all Smallville seasons and movie horror movies they remade. So I have have plenty to see my boys, especially Dean. Jensen & I were both born… Read more »

This is the show my husband and I always watch together. We never miss an episode and buy each season as it’s released. We’ve been fans since the beginning and we’re really going to miss this show. The actors are fantastic and the whole show is one of the best ever written/made. Truly sad for the end!

I watched Jared and Jensen when they were on different shows so . Then came supernatural and I’ve watched from the beginning. I love both the boys and all characters past and present. I’ve seen every episode and will be very said when the show ends. They were like family to me.

Supernatural is by far the best series that I have watched in many many years. Well done cast and crew! X

I LOVE SUPERNATURAL!! I wish Season 15 wasn’t going to be the last. I have laughed and cried throughout the 14 seasons. Love, love, love this show.

I LOVE SUPER NATURAL THE LONGER ITS ON THE BETTER IT GETS. HAVE SEEN ALL SO FAR

I,have watched this show from dayv1 also. It is such a great show and I can’t even imagine my life without it. It has everything you could hope for. Thankyou so much for giving us such an entertaining, amazing series and bless you all.