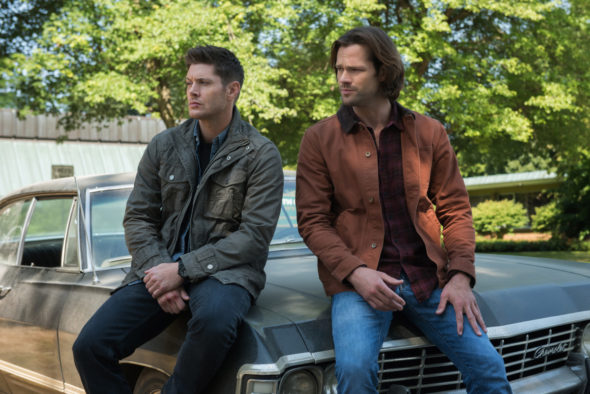 Are Sam and Dean Winchester hot-blooded or as cold as ice during the 13th season of the Supernatural TV show on The CW? As we all know, the Nielsen ratings typically play a big role in determining whether a TV show like Supernatural is cancelled or renewed for season 14. Unfortunately, most of us do not live in Nielsen households. Because many viewers feel frustration when their viewing habits and opinions aren’t considered, we’d like to offer you the chance to rate all the Supernatural season 13 episodes here.

What do you think? Which season 13 episodes of the Supernatural TV series do you rate as heavenly, hellish, or rather mundane? Should The CW cancel or renew Supernatural for a 14th season? Don’t forget to vote, and share your thoughts, below.

Maybe not a popular comment on this page but have to say it is getting old. Trudged through the last season and actually hung in there longer than many other one time fans of this show. It’s not the characters but the plot seems thin, strained, reaching for creativity and humor as this show carries on and on and …. stop watching then will be the replies of this comment, that’s the point, commenting on behalf of self (and others that didn’t but stopped watching long ago) to say I intend to! Entertaining enough to hope to see it end… Read more »

I AM A MATURE (OVER 50) FAN. THE STORY OF SAM AND DEAN—THE COOL CAR AND THE CLASSIC ROCK—I HOPE IT RUNS UNTIL WE ARE WATCHING SAM AND DEAN’S GRANDCHILDREN CARRING ON THE FAMILY BUSINESS

Love,love,love, supernatural!!!!! Whatched it over a million times and will never get tired of it!!!

Love this show for the music and the characters. Find the hidden jokes hysterical and the aliases.

This is one show I never miss! please do not cancel! I have been a fan since the very first episode!!

I LOVE this show … forever and always !!! Never leave us please 😉

I love supernatural it has gotten me through some tough times. I enjoy all of their adventures. It’s a sow I watch with my grand children. Please keep it going.

I have been a fan since its inception 13 seasons ago & continue to watch re-runs every day on TNT. I love this show; it’s one of the few that I can’t miss watching. The cast is outstanding.

Please keep Supernatural continue as long as Jared Padalecki and Jensen Ackles are willing to play Sam and Dean Winchester. The show is fresh, amazing, they keep making history, ot has incredible storylines with just the most spectacular spacial effects. I love the Supernatural it’s my favorite TV show of all time.

I agree with you, Completely!

Please Keep the episodes coming/ Somehow you are still so fresh it does not seem to be this amount of time. Just when I am worried you might be slowing down you do it again. My family even watches the reruns. Our satellite provider cancelled CW channel. But I went out and bought Roku just for you! Love you guys and writers. Thank you and CW!

Please make a Supernatural 14 and many many more in the future. My whole family loves Supernatural. Its the one thing we love to sit together every week and watch.

Please keep Supernatural my whole family loves this tv show. Its one thing that we look forward to every week when its on.