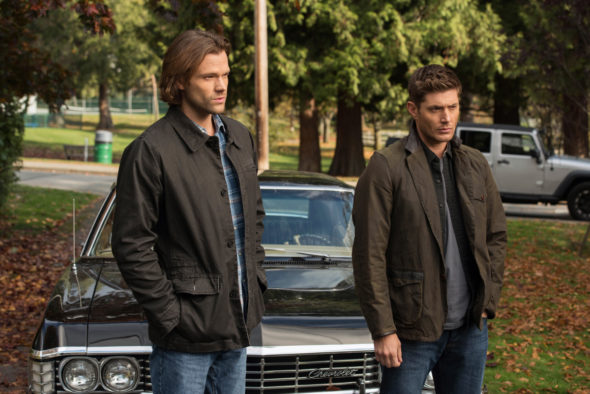 Some disappointing news for fans of Supernatural. TVLine reports The CW has ordered only 20 episodes for the TV show’s upcoming 14th season.

With the exception of season three, The CW has always ordered at least 22 episodes for each season of Supernatural. Since season seven, in fact, the number has increased to 23. It’s unclear why the network has ordered fewer episodes for season 14, but you can catch the season premiere on October 11th at 8 p.m. ET/PT.

What do you think? Do you watch Supernatural? How many more seasons do you think the show should have?

My fav show ever

I’m hoping really this is not a bad sign!
Supernatural is my only favorite show on TV and without it Television wouldn’t be the same anymore.
So I’ll keep my fingers crossed and praying for more Supernatural and more seasons too come!
Thank God for JENSEN and JARED and bless them!!

While I am also surprised by the episode-order reduction, 20 is still the bare minimum of a “full” season. Season 3 of “Supernatural” contained 16 episodes (due to the WGA strike, of course). Even though a reduced order may or may not be an indication that a scripted show is on its way out (see the “CSI” franchise, “Private Practice”, “Mike & Molly”), I hope this is not the case with “Supernatural” this season. It’s not like “Supernatural”‘s upcoming season is reduced to 13 or anything. It all could just be a matter of running out of fresh storylines, its… Read more »

I think chances are if they’ve given it a 20 episode run this time round they’re possibly testing the waters to see how it goes rating wise and then they’ll order a few additional episodes to bring it back up to 22/23 unless Padalecki and/or Ackles have other commitments this time round that clash with the shows shooting schedule.

Keep it going to season 15. 15 years- they’ve grown up! Seems like a good number. Not sure how to keep it up to season 20 but that would be even better!

We love Supernatural! Please! It’s one of the best shows out there where we loyally watch – and then buy the DVDs!!!

I have watched Supernatural since day one. I could watch it forever because the choice of Jared and Jensen to play Sam and Dean was the best. You would swear they were real life brothers. Also enjoy the fact they use towns in NE,KS,SD,CO,MT. etc. Only question iswhythe short season?

There are not many good shows on TV and fortunately for us SUPERNATURAL came along and is one of best. Please do not take this show off the air or cancel it. I live for thursday nights at 8:00 p.m.

I love supernatural. I have never missed an episode and while I know it can’t last forever, the final season and the final episode will break my heart. the boys need some real family time what with their growing families, and I want that for them, but selfishly, I want to be able to watch new episodes forever. I have a feeling that is why we are only getting 20 episodes. maybe as a concession to the actors. maybe it was either, give us less screen time or we won’t do it at all? just a thought

Hope they go on forever! I’ve never missed an episode.

More B.S. from network execs who know NOTHING about what the people want. Ratings and polls aren’t indicative of 100% of the viewership! Order the full 22 or 23, guys! Come on!