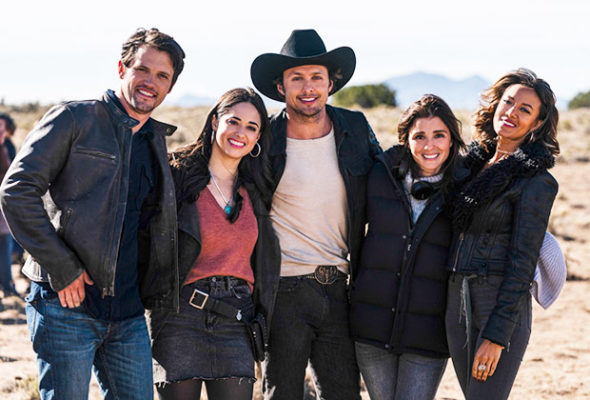 The ratings weren’t “out of this world” but The CW isn’t sending the aliens home just yet. The smallest network has renewed their Roswell, New Mexico TV show for a second season.

A science fiction drama, Roswell, New Mexico Jeanine Mason, Nathan Dean Parsons, Lily Cowles, Michael Vlamis, Michael Trevino, Tyler Blackburn, Heather Hemmens, Trevor St. John, and Karan Oberoi. Based on the Roswell High book series (which was also the basis for a 1999 TV series), this series centers on Liz Ortecho (Mason), who’s back in town after a decade away. After reconnecting with her old crush, Roswell PD Officer Max Evans (Parsons), she learns he, his sister Isobel (Cowles) and their friend, Michael (Vlamis), are aliens. Now Liz has to keep this secret from everyone she knows, including her old high school boyfriend, Dr. Kyle Valenti (Trevino), and her best friend, Maria De Luca (Hemmens). Meanwhile, the politics of hatred, fear, and division threaten to expose them all and risk everyone’s lives.

The first season of Roswell, New Mexico averaged a 0.28 rating in the 18-49 demographic and 1.06 million viewers. Season one concluded on April 23rd.

What do you think? Are you glad to hear that the Roswell, New Mexico TV show has been renewed? Will you be watching season two on The CW?

So glad Roswell New Mexico is returning for their second season. Love the story line and all the actors in the show..

So glad at least one of my favorite shows will be renewed. So disappointed that Supernatural is leaving, I still think it could go for a couple of more seasons but the cast has decided to bid it farewell.

The best news ever. Very refreshing new entertaining subjects and right out there introducing new personalities and great upbeat cast, keep up the good work just can’t wait for the new season. I did save the last episode to put me back on track. Thanks again. Pat

Roswell is coming back. Yes!. I love that show. I am 64, so maybe you shouldn’t limit your demographics. Any fan of Roswell New Mexico and aliens should watch it. The most shows I watch on TV are on CW. Thank you! I also like CW Seed

Love Roswell, glad it’s coming back for a second season.

I love this tv series & can’t wait for it to start again.

Can’t wait till the new season starts !! Love this series.

I’m so happy the show has been renewed! Yay!!!!

I’m so happy the Roswell will be returning. Loved that show. Can’t wait

SO SO Excited that Roswell is returning for another season!! We love that show, do not cancel it!! 🙂