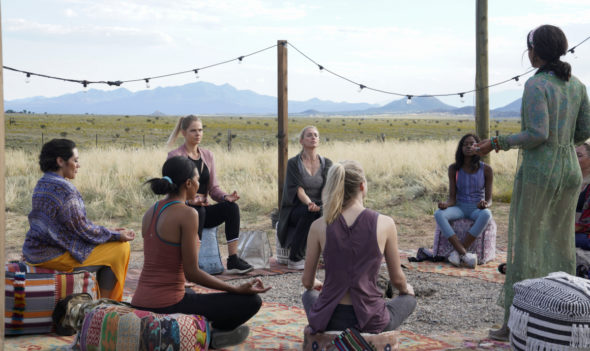 A CW sci-fi drama, Roswell, New Mexico stars Jeanine Mason, Nathan Parsons, Michael Vlamis, Tyler Blackburn, Heather Hemmens, Michael Trevino, Lily Cowles, Trevor St. John, and Amber Midthunder. Based on the Roswell High book series (which was also the basis for a 1999 TV series), this series centers on Liz Ortecho (Mason), who returns to town after a decade away. After reconnecting with her old crush, Roswell PD Officer Max Evans (Parsons), she learns that he, his sister Isobel (Cowles), and their friend Michael (Vlamis), are aliens. In season two, Max has resurrected Liz’s long-dead sister, Rosa (Midthunder), and sacrificed his own life in the process. Liz mourns her lost love by seeking comfort in science, both earthly and extraterrestrial, as Rosa turns to Kyle (Trevino) to help her find her place in the unfamiliar territory of 2019. In their grief, Isobel explores potentially dangerous self-defense, and Michael spirals into some old bad habits, putting his relationships with Maria (Hemmens) and Alex (Blackburn) at risk. Meanwhile, Jesse Manes (St. John) has experienced a change of heart after a medical emergency.

What do you think? Which season two episodes of the Roswell, New Mexico TV series do you rate as wonderful, terrible, or somewhere between? Are you glad that Roswell, New Mexico has been renewed for a third season on The CW? Don’t forget to vote, and share your thoughts, below.

I love Roswell, I am so looking forward to the next season! The cast is wonderful!

I love this show! Cannot wait until Mondays to see it! love the characters! Please don’t cancel!

Enjoy the show a lot,like Max , glad he is the good guy again!

I love the show and I would be heartbroken if they cancelled it. For real it’s how I get thru my Monday. Knowing that Roswell is coming on at 8pm.

I like the show, but way too much time spent to bring Max back. Ruins the show. They need to get him back more quickly.

I love Roswell looking forward to next week

Yes I’m super excited that it’s coming back for a 3rd season! I absolutely love this show!! And I would be very upset if it got canceled so please keep it on for us lovers ***

Yes very glad it’s back. Looking forward for next week Bring Max back

e
Enjoyed the show…waited patiently for the 2nd season to begin…hopes were high that Max would somehow survive after the events of season 1…not looking good for him..but I really
like all the different angles and directions the show can seemingly go.thanks CW