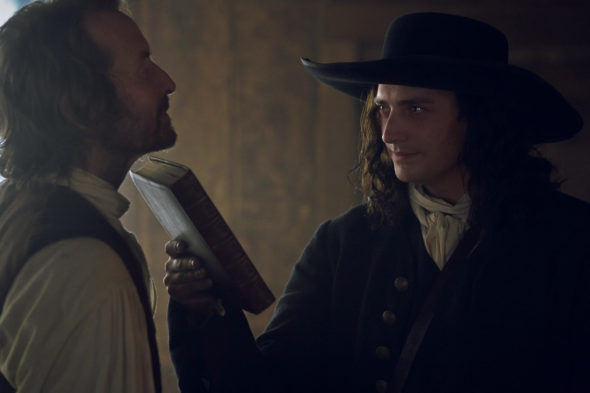 Will the mystery be solved in the first season of the Barkskins TV show on National Geographic? As we all know, the Nielsen ratings typically play a big role in determining whether a TV show like Barkskins is cancelled or renewed for season two. Unfortunately, most of us do not live in Nielsen households. Because many viewers feel frustration when their viewing habits and opinions aren’t considered, we invite you to rate all of the first season episodes of Barkskins here.

A National Geographic historical fiction drama, Barkskins is based on the novel of the same name by Annie Proulx. The show stars David Thewlis, Marcia Gay Harden, Aneurin Barnard, James Bloor, Christian Cooke, David Wilmot, Thomas M. Wright, Tallulah Haddon, Kaniehtiio (Tiio) Horn, Lily Sullivan, and Zahn McClarnon. The series examines the mysterious massacre of settlers in the vast and unforgiving wilds of 1690s New France. This event threatens to throw the region into an all-out war. Likely suspects abound – the English, the Hudson’s Bay Company, and a band of Kanien’kehá:ka (Iroquois) possibly in league with the English looking to drive the French from the territory. But, who or what brought these settlers to such a tragic end?

What do you think? Which season one episodes of the Barkskins TV series do you rate as wonderful, terrible, or somewhere between? Do you think that Barkskins should be cancelled or renewed for a second season on National Geographic? Don’t forget to vote, and share your thoughts, below.

This is a great show

The acting is great, the plot outstanding and setting realistic, please more seasons!!!!!!

Brilliant show ! Barkskins.please do another series

This is a wonderful series. Please renew.