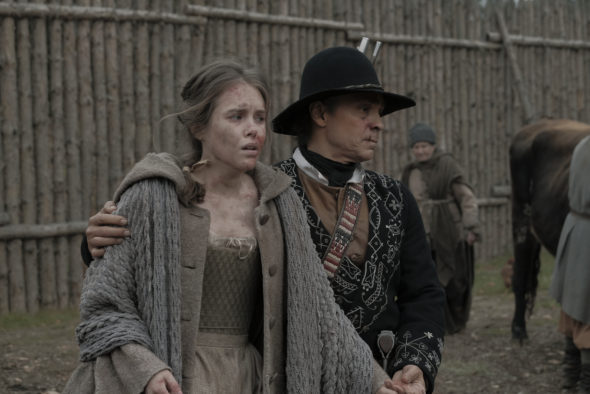 What really happened to the settlers? Has the Barkskins TV show been cancelled or renewed for a second season on National Geographic? The television vulture is watching all the latest cancellation and renewal news, so this page is the place to track the status of Barkskins, season two. Bookmark it, or subscribe for the latest updates. Remember, the television vulture is watching your shows. Are you?

Airing on the National Geographic cable channel, Barkskins is based on the novel of the same name by Annie Proulx. The show stars David Thewlis, Marcia Gay Harden, Aneurin Barnard, James Bloor, Christian Cooke, David Wilmot, Thomas M. Wright, Tallulah Haddon, Kaniehtiio (Tiio) Horn, Lily Sullivan, and Zahn McClarnon. The series examines the mysterious massacre of settlers in the vast and unforgiving wilds of 1690s New France. This event threatens to throw the region into all-out war. Likely suspects abound – the English, the Hudson’s Bay Company and a band of Kanien’kehá:ka (Iroquois) possibly in league with the English looking to drive the French from the territory. But, who or what brought these settlers to such a tragic end?

The first season of Barkskins averaged a 0.07 rating in the 18-49 demographic and 704,000 viewers. Find out how Barkskins stacks up against other National Geographic TV shows.

Will National Geographic cancel or renew Barkskins for season two? The ratings have been okay but, the channel doesn’t air many original scripted series so it’s difficult to know what they consider to be a success.  The series’ creator wants to make a second season so, we’ll have to wait and see if Nat Geo agrees. I’ll update this page with breaking developments. Subscribe for free alerts on Barkskins cancellation or renewal news.

What do you think? Do you think that the Barkskins TV show should be cancelled or renewed for a second season?

We have enjoyed the show so far. We are looking forward to a second season.

Love this show. Hurry up and bring it back

Waiting for season two. Loved it.

Second season,loved to see it happen

Of course it should be renewed! Any time period drama set before 1970 is fantastic. Especially pre 20th century. Unfortunately since there’s no teen age vampires, or zombies the ratings probably weren’t up to snuff. Us educated fans long for more in-depth plot writing. RENEW IT!!

Would love for National Geographic to renew Barkskins for a 2nd season. I love the first season, thought it was very well done, and was really looking forward to the second season!

Love this show! Please renew for a second season.

Can’t believe they’re holding back on this one. It’s one of the best series on the air, much better than Frontier, imho, and way better than most of the other crap they show. Must not be Woke enough to run another season.

Please renew this awesome program, it’s the best thing to come to TV in years!!