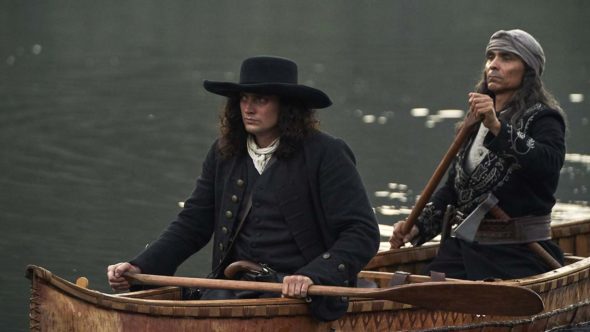 Recently, National Geographic finished airing the first season of the channel’s historical but fictional drama series, Barkskins. The TV show hasn’t been cancelled or renewed for a second season yet but the show’s creator, executive producer Elwood Reid, is hoping for a few more seasons to fully tell the series’ story.

Having aired on Monday nights, the Barkskins TV series is based on a portion of the novel of the same name by Annie Proulx. The show stars David Thewlis, Marcia Gay Harden, Aneurin Barnard, James Bloor, Christian Cooke, David Wilmot, Thomas M. Wright, Tallulah Haddon, Kaniehtiio (Tiio) Horn, Lily Sullivan, and Zahn McClarnon. “Barkskins” is a term for indentured servants who are working toward their freedom. The series examines the mysterious massacre of settlers in the vast and unforgiving wilds of 1690s New France. This event threatens to throw the region into all-out war. Likely suspects abound – the English, the Hudson’s Bay Company and a band of Kanien’kehá:ka (Iroquois) possibly in league with the English looking to drive the French from the territory. But, who or what brought these settlers to such a tragic end?

The first season of Barkskins averaged a 0.07 rating in the 18-49 demographic and 704,000 viewers. National Geographic doesn’t have many original scripted series so it’s difficult to know if those numbers are good enough to justify a second season renewal. The first season’s eight episodes finished airing on June 15th.

Barkskins was initially supposed to have 10 episodes. What happened to those two missing episodes? You can blame it on Mother Nature.

Reid tells Assignment X, “We were originally a ten-episode show, and I had planned ten episodes of the story, but again, because we shot this in a real location, what ended up happening was, we went up there, and I could not get my sets built until July. I couldn’t do it. So at first, I cut the episodes to nine. I told the studio, ‘Well, we’re going to do nine episodes.’ And then the building took longer and longer and longer. And I realized, I maybe could have shot nine episodes, but we would have been doing it in two feet of snow, because I finished shooting in October, and a week later, a huge snowstorm hit. So I cut it to eight episodes, because of the weather, and because of [the time it took for] the set builds. We built everything practical. Everything you see up there, we built.”

Reid acknowledges that the first season left all of the characters “in incredibly difficult, tricky situations.” If Barkskins is renewed for a second season, he says that the series’ story will continue to follow the path of the show’s original characters rather than strictly adhering to the book’s direction. The original book spans centuries but Reid wants to keep focusing on the first season’s characters and time period.

Reid sees the first season as merely the first chapter of the story’s saga and envisions the show having four or five seasons total. Excited about the idea of continuing the series, he tells Collider, “I’m working on a novel and a bunch of other TV projects, and Barkskins kept coming back to me with ideas for the next season. I have a file for season two with all of these ideas. It’s these characters, and it’s the actors and getting to work with this cast. The sign of a good show is when they’re bouncing around, and you’ve got more and more and more, and I certainly do for these characters.”

He doesn’t want to see Barksins go on and on, however. Reid notes, “I think stories have finite beginnings and ends. And I definitely feel that with this story. I think you could accomplish a really great, satisfying story in four seasons, maybe five at the most. I’ve always admired those shows that put a cap on it. They say, ‘We’re going to end it,’ and you write to the ending, if possible. … You have to have the guts as a writer to tell the studio or the network, ‘I envision the ending in X amount of seasons.’ And you work really hard to get there, and then tell a really good story doing that. I’m very particular. I try not to waste a minute of television.”

What do you think? Have you watched the first season of Barkskins on National Geographic? Do you think that this series should be renewed for a second season or, should it be cancelled instead?

Absolutely! Please bring it back for season 2! Great cast, characters, and setting. Really want to see what happens next.