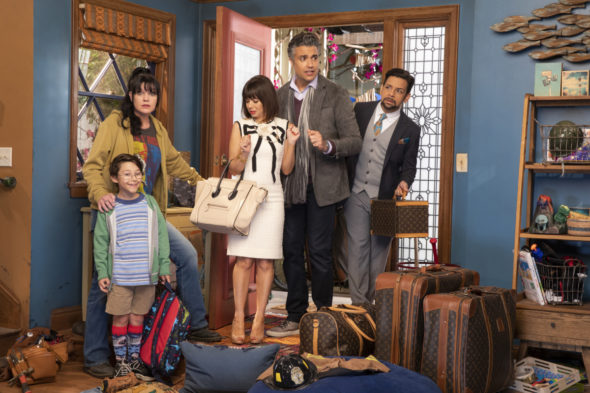 Though class differences may separate the women, and the size of the house and the number of people living in it will test the limits of hospitality, the bond of extended family might be exactly what they need.

Series Finale:
Episode #13 — Sammy’s Party
When Sammy’s birthday party location suddenly falls through, the family rushes to set up the celebration in the backyard and is surprised by an unexpected guest. Also, Javier and Elizabeth decide to look for their own apartment. Kyle Bornheimer returns as Barry, Jackie’s ex-husband and Sammy’s father.
First aired: June 25, 2020.

What do you think? Do you like the Broke TV show? Do you think it should have been cancelled or renewed for a second season?

Worst show ever . Not funny , poor acting . It was destined to fail in the first episode .

I am so disappointed in CBS. I waited for weeks, along with everyone else, I’m sure, to find out who Javier’s papa is. It was such a good show. I hope another station picks it up.

OH Hell no! I enjoyed that show!!! Pauly and Natasha are a delight in everything they do and the cast played off of each other so well!!! Typical; non woke, normal comedy is cancelled…

VERY disappointed Broke was cancelled, especially on such a cliff-hanger! Would Javier & Lizzie get the trust fund back? Pauley Perette is a great comic actress.. This show was positive, one the whole family could watch together. Big mistake to cancel it in my opinion. Shame on CBS!!

You all canceled two of the best shows now Broke and God Friended Me I’m to the point that I would rather watch ABC NBC or FOX at least they give it a few seasons at least 3 you cancel things that are getting good and you end it. These shows were something the whole family could watch instead of sex and violence.

Broke was one of the funniest shows on TV. I was very sorry they cancelled it. I hope it will be revived someday.

Broke was one of the funniest shows on TV. I was very sorry to see it cancelled. I hope someday it gets revived.

It was a good show. I laughed so much. A nice blended family role model comedy.
I wish it wasn’t cancelled.
Maybe ABC will pick it up as its got Disney quality.

I really enjoy the show, It made me laugh so hard,

I love the show broke, so refreshing. Natasha Leggero is amazing. Why do networks always cancel the best shows?

I really enjoyed this show. I’m quite disappointed that Broke was cancelled. This show shows a family pulling together through tough times, which we can all relate to these days.

I enjoyed Broke. It was the kind of show we need

I liked the show because it had Hispanic and Caucasian representation. The actors and actresses seemed to work together very nicely.

I enjoyed the show. No sex, no “bad” language. Cute show that you can watch with your kids.