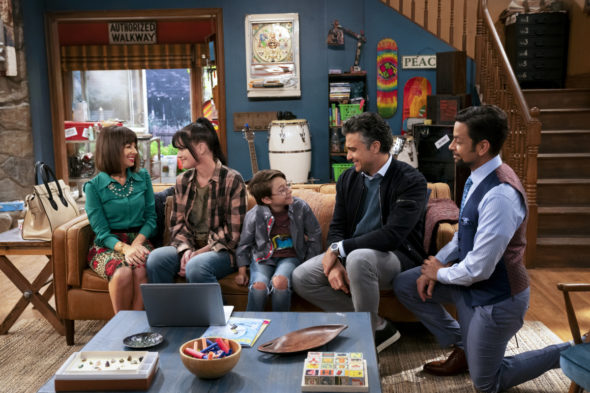 Are viewers ready for NCIS’ Pauley Perrette in a new role? Has the Broke TV show been cancelled or renewed for a second season on CBS? The television vulture is watching all the latest cancellation and renewal news, so this page is the place to track the status of Broke, season two. Bookmark it, or subscribe for the latest updates. Remember, the television vulture is watching your shows. Are you?

The first season of Broke averaged a 0.61 rating in the 18-49 demographic and 4.72 million viewers. Find out how Broke stacks up against other CBS TV shows.

Will CBS cancel or renew Broke for season two? CBS launched two new sitcoms this season, The Unicorn and Carol’s Second Act, and neither did very well in the ratings. The network could really use a successful new comedy so, I’m thinking that the network will give this one every chance to succeed. For now, I’m leaning toward a renewal. I’ll update this page with breaking developments. Subscribe for free alerts on Broke cancellation or renewal news.

What do you think? Were you hoping the Broke TV show would be renewed for a second season? Are you sorry that CBS cancelled this TV series, instead?

I love Broke! It’s so nice to have a great comedy on TV. I do hope it’s renewed!

Broke is the best new comedy on the air. I hope they reconsider their decision to cancel the show.

LOVED the show Broke..so extremely sad that it will not continue for more seasons..

LOVED the series Broke..so extremely sad to see it end..

I finally found a new show like broke to keep me laughing It is the best new sitcom to come along in years. I can’t wait for you to come on every week it is a brilliant show and I can’t believe that you would even consider taking it off the year. What is wrong with you people all you want is violence and stupid shows with no substance well thishow has substance and it’s real. Please don’t take it off the air. All the actors on the show are so brilliant and so funny and Pauley Has once more… Read more »

The best new comedy show on TV these days and you are canceling it, who makes these decisions, fire that person and keep the show that’s a no brainer.

I loved this show! So disappointed it’s cancelled. The banter between Javier and Luis is hysterical. C’mon, give it a chance!! The only casting change I would make is Perette. She is the only one that doesn’t seem to fit. How is that Kardashians keep getting renewed and a funny show like Broke, gets cancelled?

I enjoy the series and I feel there is a lack of Hispanic representation on television. There are series of other cultures which I feel are not truly good programs but they continue to be shown. With Hispanics representing a large portion of the population, it is important to continue providing entertainment geared towards the Latinos. Please continue the series Broke and other programs geared towards hispanics.

I’m not a comedy fan. I watch because of Pauley. I have to say it gets better after the first episode. Maybe viewers should give it another chance. It’s better than constant CORONA virus news and violent shows for me.

Couldn’t watch pass the twenty minute mark in the first episode. It’s a totally failed bombed idea of a show. Should be cancelled immediately.

Hopefully this show will be canceled quite rapidly! It certainly has no redeeming social value and I’m very surprised that Pauley would even consider a part in it. She’s a very talented actress who deserves to be in a much better show

The teasers for the show were very weak. I am not the biggest Pauley fan in the world – but wanted to give it a chance. Result: no more chances. Forced laughter, stale jokes, absolutely nothing fresh about “Broke” whatsoever. Seriously, would we be amazed if it lasted two more weeks?