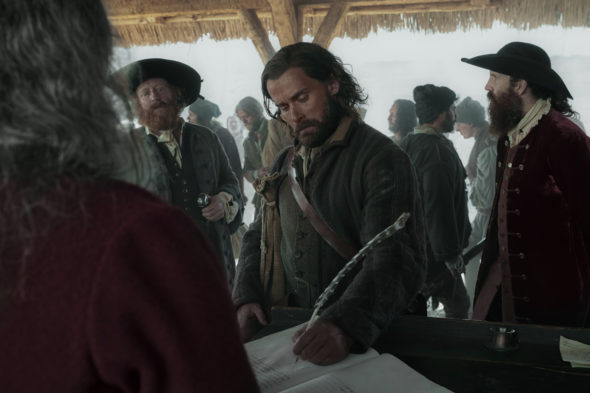 TV show description:
A historical fiction drama series, Barkskins is based on the novel of the same name by Annie Proulx.

The TV show examines the mysterious massacre of settlers in the vast and unforgiving wilds of 1690s New France. This event threatens to throw the region into an all-out war. Likely suspects abound – the English, the Hudson’s Bay Company, and a band of Kanien’kehá:ka (Iroquois) possibly in league with the English looking to drive the French from the territory. But, who or what brought these settlers to such a tragic end?

The series tells a story of exploration, adventure, and ambition among dreamers and fighters. Some have a utopian vision of the world while others are crass and conniving. All, however, are navigating the perils of a treacherous new frontier. As tensions escalate, unlikely alliances are forged, old antagonisms deepen and new families are formed against the seemingly endless natural riches and hidden dangers of the new American continent.

What do you think? Do you like the Barkskins TV show? Do you think it should be cancelled or renewed for another season?

Please clarify if the Barkdskins has been canceled. NG did a great job bringing the factual based series to television. It’s a shame we may not see a second season.

I just watched season one in 1 sitting….great show…..