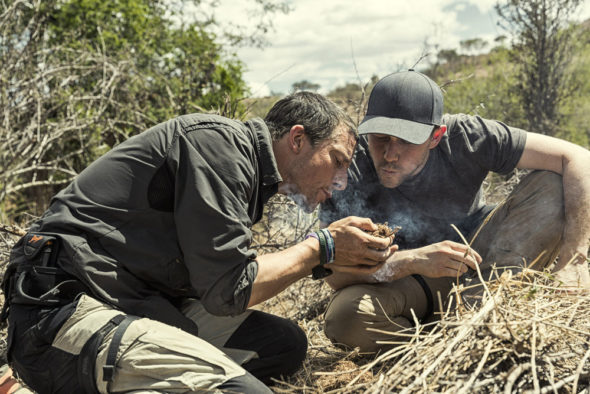 It’s a good time to be a National Geographic fan. Recently, the network announced they’ve renewed Running Wild with Bear Grylls, Brain Games, and Life Below Zero for new seasons.

Additionally, the network announced they’ve ordered a new spinoff series, Life Below Zero: Next Generation, which will air in 2021.

The new season of Running Wild with Bear Grylls is expected to debut on National Geographic Channel this fall. You can read more info about the renewals below:

National Geographic Builds on Power of Its Diverse Slate With Season Pickups of Franchise Series BRAIN GAMES, RUNNING WILD WITH BEAR GRYLLS and LIFE BELOW ZERO

Also Announced, Gordon Ramsay: Uncharted, Produced by Studio Ramsay, Returns for Season 2 on May 10 at 10/9c on National Geographic

“Brain Games, Running Wild with Bear Grylls, Life Below Zero and Gordon Ramsay: Uncharted are all emblematic of our unscripted programming strategy – highly entertaining, personality driven premium programming that lives up to the National Geographic brand,” said Monroe. “We are thrilled to greenlight the continuation of these franchises and to have Keegan-Michael Key, Bear Grylls, Gordon Ramsay, and fan-favorite Sue Aikens on our network.”

Produced by Magical Elves, an additional season of BRAIN GAMES, with Keegan-Michael Key returning as host, was greenlit ahead of its new season debut. Shot in front of a live studio audience, BRAIN GAMES challenges some of the world’s biggest celebrities to realize their special brain power through fun and highly entertaining interactive games, illusions and social experiments that will reveal the “why” behind the “wow.” On Monday, Jan. 20, at 8/7c with two back-to-back episodes, BRAIN GAMES launches with everyone’s favorite Hollywood couple, Kristen Bell and Dax Shepard, going head-to-head in the “Battle of the Sexes,” a series of games designed to reveal how men’s and women’s brains differ; then immediately following at 9/8c, Emmy- and Golden Globe-winning Ted Danson learns how our brains distinguish fact from fiction.

The new season of BRAIN GAMES is packed with the world’s biggest celebrities, including Tiffany Haddish, Drew Brees, Jordan Peele, Meghan Trainor, Anthony Anderson, Tom Hanks, Tim Allen, Jack Black, Mark Cuban, Kevin Hart and Rebel Wilson. With the help of host Key, along with world-famous mentalist Lior Suchard and field correspondent and neuroscientist Cara Santa Maria, each episode delivers shocking revelations on the science of our brains and surprising explanations behind why we do what we do, making it a television event for the whole family. Join in on the fun as BRAIN GAMES reveals the incredible science of what makes our brains tick!

Finding a new home on National Geographic this season, the wildly popular hit series RUNNING WILD WITH BEAR GRYLLS garners an original season pickup ahead of its season finale. In the current season on the adrenaline-packed RUNNING WILD, world-renowned adventurer Bear Grylls traversed croc-infested mangroves in the Gulf of Panama with Brie Larson, experienced the ancient art of trout tickling with Channing Tatum in the mountains of Norway, ate ants and then climbed a mountain in the Swiss Alps with free soloist Alex Honnold, and even drank milk directly from a goat’s udder with Armie Hammer in Sardinia. In the season finale on Tuesday, Jan. 21, at 10/9c, Grylls will take Emmy-nominated actor Zachary Quinto on a treacherous adventure through the dense Panamanian jungle during tropical storm season.

Following Life Below Zero’s fourth Emmy(R) last fall, global content leader BBC Studios and National Geographic partner on a three-series commitment deal that expands the Life Below Zero brand in the United States, Canada and Caribbean Basin. The deal includes an all-new eight-part spinoff series, Life Below Zero: Next Generation, which is slated to premiere on National Geographic in 2021 and will be produced by BBC Studios’ Los Angeles production unit – the original creative and production team behind Life Below Zero. Life Below Zero: Next Generation will follow new individuals who, in a brave move, recently left their traditional lifestyle behind to face a challenging new world off the grid in the wilds of Alaska.

The three-series commitment deal also includes two additional seasons of Life Below Zero and an additional season of Life Below Zero: Port Protection. The common theme in Life Below Zero and Life Below Zero: Port Protection is the cast of people who have left traditional society behind. They have chosen a different life, with varying degrees of danger and challenges, in the remote regions of Alaska. In Life Below Zero: Next Generation, the all-new cast members have tried contemporary life and rejected it in favor of a life of freedom in the brutal Alaskan wilderness. They speak to the growing dissatisfaction the current generation has with technologies, which is ubiquitous in modern life. The crew will capture the cast members as they rush to prepare for and survive the frozen months of winter to the spring thaw.

Additionally, National Geographic announced that the second season of GORDON RAMSAY: UNCHARTED will premiere Sunday, May 10, at 10/9c. Produced by Studio Ramsay, the all-new episodes will feature Gordon Ramsay continuing his journey across the globe, embarking on exhilarating missions to unearth world cultures through food and adventure, familiar ground for Ramsay following his hit U.K. series “Gordon’s Great Escapes.”

GORDON RAMSAY: UNCHARTED follows Ramsay as he meets with indigenous people around the globe to learn about the cultures, dishes and flavors unique to each location. Every ingredient he harvests and dish he tastes will inspire a new recipe from scratch, created to represent the heart of that culture. Each episode concludes with Ramsay challenging himself with a local food legend by his side – putting his newfound skills to the test as they cook a feast together for the natives. For Ramsay, food is the gateway to culture, and every adventure is a portal into the soul of the people and place. Join Ramsay as he travels to Tasmania, Indonesia, Mexico, India, Guyana, Louisiana and Texas, to mention just a few stops along his global journey.

GORDON RAMSAY: UNCHARTED is National Geographic’s No. 1 unscripted new series to launch since 2016, with RUNNING WILD WITH BEAR GRYLLS following in second. Over 20 million viewers have tuned into RUNNING WILD WITH BEAR GRYLLS across linear and nonlinear platforms, and 25 million for GORDON RAMSAY: UNCHARTED. Since its 2013 debut, LIFE BELOW ZERO has received 11 Emmy nominations; has won four Emmys for its craft in cinematography and picture editing, including one in 2019; and has become a National Geographic Channel fan favorite.

For more information, visit www.natgeotv.com or our press site www.natgeotvpressroom.com, or follow us on Twitter using @NatGeoPR.

RUNNING WILD WITH BEAR GRYLLS was developed by Grylls and Delbert Shoopman. The series is produced by Electus, a Propagate Company, and The Natural Studios, A JV with Banijay Group. For Electus and The Natural Studios, Grylls serves as executive producer along with Chris Grant, Drew Buckley, Ben Silverman, Howard Owens, Rob Buchta, Liz Schulze and Delbert Shoopman. For National Geographic, Bengt Anderson is executive producer. Daniels is executive vice president of global unscripted entertainment for National Geographic Channels.

What do you think? Do you watch Nat Geo? What’s your favorite show on the network?

I’d much rather watch the Hailstones, Jesse and Ricko than Sue. I wish they would bring Glenn back. He was always so excited about the life.