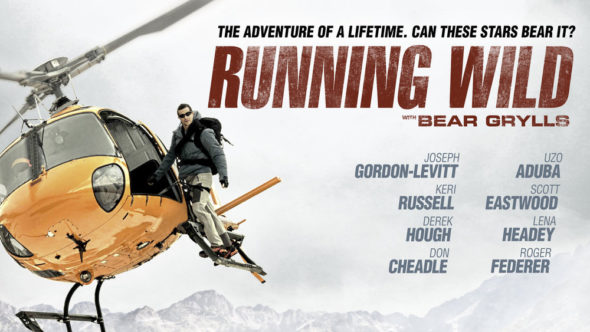 It’s that time of year when a self-proclaimed survivalist absconds into the wilderness with the rich and famous, and no one even calls in a crisis negotiator. In the fourth season, can the Running Wild with Bear Grylls TV show still earn the kind of Nielsen ratings required to survive another year on NBC? Will Running Wild with Bear Grylls be cancelled or renewed for season five? Stay tuned. **Status update below.

An NBC reality TV series, Running Wild with Bear Grylls follows adventurer Bear Grylls — as he takes celebrities on a 48-hour journey of a lifetime — into the wildest and most remote locations the world has to offer. Celebrities featured in season four include Joseph Gordon-Levitt, Keri Russell, Lena Headey, Roger Federer, Uzo Aduba, Don Cheadle, Scott Eastwood, and Derek Hough.

7/9 update: You can see the rest of the latest night’s ratings.

For comparisons: The third season of Running Wild with Bear Grylls averaged a 1.09 rating in the 18-49 demographic and 3.859 million total viewers. While it was down by about 4% in the demo, compared to season two, the average total audience increased by more than 12%.

What do you think? Do you like the Running Wild with Bear Grylls TV series? Will you follow this TV series from NBC to National Geographic Channel for the fifth season?

**2/11/19 Status Update: Running Wild with Bear Grylls has been renewed for season five, which is moving to National Geographic Channel. Details here.