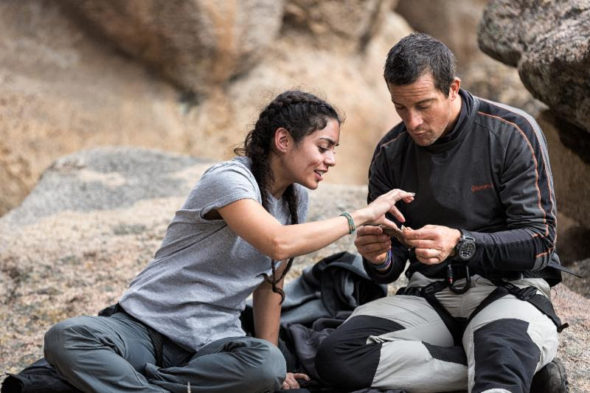 Running Wild with Bear Grylls is making a big move. Recently, it was announced the TV show’s fifth season will air on National Geographic Channel.

The new season of the wilderness survival series will see Bear Grylls take celebrities to “the jagged cliffs of Sardinia; a massive glacier in Iceland; the deep jungles and remote islands of Panama; and the deserts and canyons of Utah.”

Season five of Running Wild with Bear Grylls is coming to National Geographic Channel in December 2019.

WASHINGTON, DC / PASADENA, CA Bear Grylls is no stranger to National Geographic, having been tapped as host and narrator of the network’s upcoming natural history series Hostile Planet, premiering this April. And today, National Geographic announces an additional partnership with Grylls that the network will be the new home of wildly popular hit series Running Wild with Bear Grylls, which is currently in production and slated to premiere in December 2019. National Geographic Global Television Networks’ President Courteney Monroe was joined by Grylls on stage during the network’s TCA session to make the announcement.

The new season, which includes a new celebrity lineup of adventurers, will transport viewers across remote locations in the US and around the world, including the jagged cliffs of Sardinia; a massive glacier in Iceland; the deep jungles and remote islands of Panama; and the deserts and canyons of Utah. These celebrities will push beyond their limits to see if they can endure the harsh wilderness in their high-octane, action-based, fear-tackling journeys. The intrepid cast members will face their deepest fears and tackle everything from wild animals to rock repelling as they will journey through some of the world’s most unforgiving wildernesses.

“I’m so proud to have joined the National Geographic family, whose brand is synonymous with adventure,” says Grylls. “Sharing an epic wilderness journey with these world-renowned celebrities and getting to know the human side of them along the way is the magic of this show. Ultimately, we aim to inspire people to break free from their comfort zones and embrace the adventurous spirit that we all possess.”

“Bear is the perfect fit National Geographic, and we’re fortunate that he’s not only the face of the upcoming Hostile Planet, but that he’s also brought home his high-adrenaline series Running Wild with Bear Grylls,” says Geoff Daniels, executive vice president of global unscripted entertainment for National Geographic Channels. “This season has the DNA to be the most action packed one yet with bigger and bolder physical challenges, more of Bear’s totally innovative, spur-of-the-moment survival tricks and plenty of gut-wrenching and unforgettable field-inspired ‘dining’ experiences. In addition, we’re creating the most visually immersive, exotic, harrowing and downright beautiful looking season to date.”

Throughout the past year, National Geographic has aired episodes of the previous seasons of Running Wild with Bear Grylls.

What do you think? Are you a fan of Running Wild with Bear Grylls? Will you watch the new season on Nat Geo?

Love Bear and his show. He does all the scary things I would never do, but live vicariously through him and his guests. ❤️❤️❤️

Have enjoyed these shows for a number of years & always look forward to new the new series. It goes where I would be afraid to go in person. Looking for a post of the celebs who will be on in this new series.

So excited and looking forward to Season 5 of Running Wild with Bear Gylls. This kind of adventure has always been in my DNA and I experience these through this series. Many thanks!