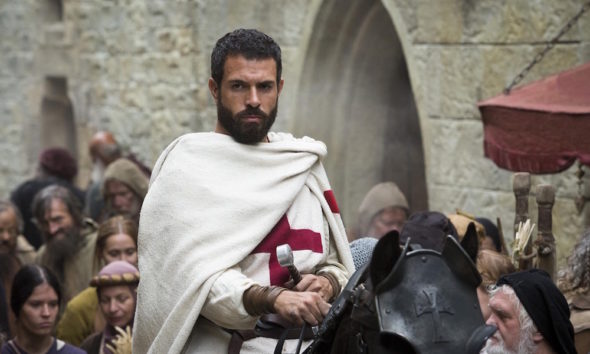 “You betrayed the brotherhood.” History has just released the official trailer for season two of Knightfall.

Season two of Knightfall premieres on History on March 25th at 10 p.m. ET/PT.

Pasadena, CA – February 10, 2019 – HISTORY’s popular drama series “Knightfall” from A+E Studios returns for season two on Monday, March 25 at 10PM ET/PT, it was announced today from the 2019 Winter Television Critics Association tour along with the first trailer. Trading in his lightsaber for Medieval sword, Mark Hamill (Star Wars, BAFTA-winning voice of The Joker) makes his series debut alongside star Tom Cullen (“Downton Abbey,” “Gunpowder”) as the series eight-episode sophomore season embraces a more brutal view of this harsh time in history, and heads towards the ultimate demise of the Templar Order which occurred on Friday the 13th, 1307.

“Knightfall” goes inside the medieval politics and warfare of the Knights Templar, the most powerful, wealthy and mysterious military order of the Middle Ages. The series goes deep into the clandestine world of this legendary brotherhood of warrior monks to learn who these knights were, how they lived, and what they died believing. With the historical and ruthless downfall of the Templar Order on the horizon, season two focuses on themes such as power, redemption, revenge, betrayal, family, and ultimately an epic war between church and state. Hamill joins the cast as new character Talus, a battle-hardened Knight Templar veteran and initiate master who is tasked with preparing the next generation of men to proudly wear the iconic red cross on their chests and become “God’s Executioners.”

Returning for season two are series regulars Ed Stoppard (“The Crown”) as King Philip IV of France, P�draic Delaney (The Wind That Shakes the Barley, “The Tudors”) as Gawain, Simon Merrells (“Spartacus”, “Dominion”) as Tancrede, Julian Ovenden (“Downton Abbey”) as William DeNogaret and Jim Carter (“Downton Abbey”) as Pope Boniface VIII. In addition to Hamill, new cast members to season two include previously announced Genevieve Gaunt (“The Royals”) as Princess Isabella, the daughter of King Philip who history would eventually call “the she-wolf of France,” Tom Forbes (“The Bastard Executioner”) as Prince Louis, the violent and unpredictable son of King Philip and heir to the throne, and Clementine Nicholson (Underworld: Blood Wars) as Margaret, Princess of Burgundy and the devoted wife of Prince Louis of France.

Please DO NOT CANCEL KNIGHTFALL! It’s an AWESOME SHOW You idiots keep cancelling all the good shows!!! Just STOP IT!!! Who cares about the ratings….they only tell a fraction of the story!!! I do not follow/watch one show during the season or months it newly airs. I am just one of many that only watch the season after the fact….so, at least one fan is not being counted by your worshiped rating system!!!