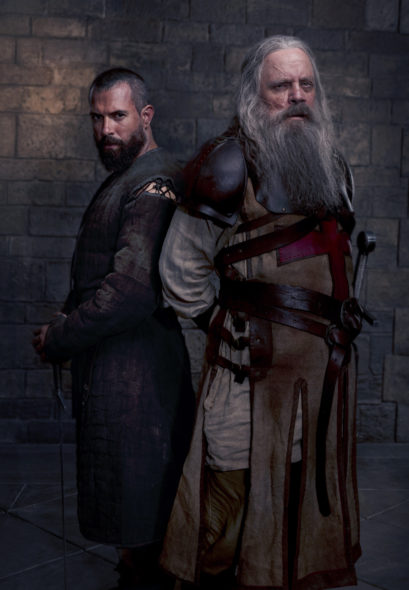 How goes the battle for the Knights Templar, during the second season of the Knightfall TV show on History? As we all know, the Nielsen ratings typically play a big role in determining whether a TV show like Knightfall is cancelled or renewed for season three. Unfortunately, most of us do not live in Nielsen households. Because many viewers feel frustration when their viewing habits and opinions aren’t considered, we’d like to offer you the chance to rate all of the Knightfall season two episodes here. *Status update below.

What do you think? Which season two episodes of the Knightfall TV series do you rate as wonderful, terrible, or somewhere between? Should History cancel or renew Knightfall for a third season? Don’t forget to vote, and share your thoughts, below.

*5/8/20 update: Knightfall has been cancelled by History.

This was so disappointing for not renewing a 3rd season. Was telling all my friends what a great series, then no 3rd season‼️☹️ This series was worth returning, not like all the other programs that continue.

Please have a season 3 my husband and I both love this show!!

Please don’t let this series die, it would be a very big mistake. So many of us are looking forward to seeing more, so I ask you to please continue it.

PLEASE FINISH THE HISTORY! I ❤️ THIS SHOW- STUMBLED ON IT &SO GLAD I DID-. PLEASE DON’T LEAVE IT LIKE THIS- LIKE THE TUDORS YOU HAVE SO MUCH TO STILL REVEAL

Knightfall is too good to be cancelled. It’s a great action, intense drama, and quite addictive. I cheered, laughed, cried, and even hollered at the tv. Tom Cullen is amazing! Can’t wait for season 3! Renew renew renew!!!!

Too good of a show to be cancelled. With the ignorance of history in todays society, a show of this cal;iber certainly would be a welcome viewing.

Please renew season 3. I just love this time of History and even if it is not totally factual it is something to look forward to each week. Can’t wait to find out if you are going to renew it.

Please make season 3!!! The whole “Knightfall” series has been amazing… I have no complaints, except that I want to see more and you guys aren’t moving and creating fast enough!!! I don’t know much about the “ratings” and/or certain quotas needed for the series to continue, but no one asked my opinion; so I’m simply saying: ‘ PLEASE MAKE SEASON THREE!!! PLEASE, PLEASE, PLEASE!!!’