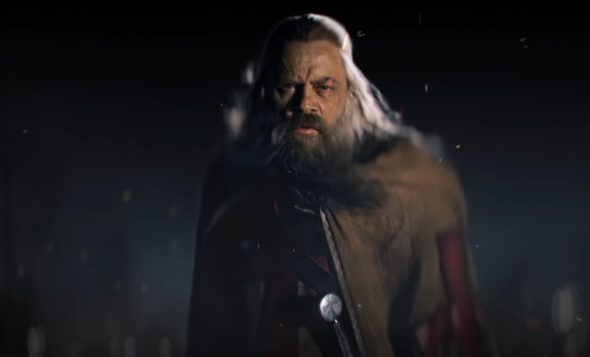 “Leave us and never return.” History has just released a new teaser for season two of Knightfall.

Season two of Knightfall will feature Mark Hamill as Talus, “a battle-hardened Knight Templar veteran of the Crusades, who survived captivity for ten years in the Holy Land and is tasked with training the new initiates to the Order.”

History has not yet announced a premiere date for the new season, but you can check out the new teaser and read more info below:

New York, NY – January 23, 2019 – HISTORY releases the first tease from season two of its popular drama series “Knightfall,” which introduces the relationship between the characters Talus and Landry played by Mark Hamill (Star Wars, BAFTA-winning voice of The Joker) and Tom Cullen (“Downton Abbey,” “Gunpowder”) respectively. The spot will air this evening during the network’s hit drama “Vikings.”

Hamill joins the cast as “Talus,” a battle-hardened Knight Templar veteran of the Crusades, who survived captivity for ten years in the Holy Land and is tasked with training the new initiates to the Order. The voice over in this tease reveals Talus’ moral conflict with Landry (Cullen) as a Templar. The sword is the symbol that unites and divides the brotherhood this season, and its flames foreshadow what is to come for the Templars on Friday the 13th. Cullen plays the courageous and headstrong Templar Knight, Landry, who last season we left grief-stricken but hopeful.

“Knightfall” explores a dark time in history from the Templar perspective, embracing an authentically grittier, darker, and more brutal Medieval period than has ever been seen before. The drama series goes inside the medieval politics and warfare of the Knights Templar, the most powerful, wealthy and mysterious military order of the Middle Ages and goes deep into the clandestine world of this legendary brotherhood of warrior monks to learn who these knights were, how they lived, and what they died believing.

What do you think? Have you seen Knightfall? Will you watch the new season?

I love this show I’m hoping for more

Hmmm apparently women love this show if you look at the below comments. A fetish for Knights must be getting popular again.

Definitely will be watching the new season!!

I am looking forward to the next season. I find the history interesting.

I can’t wait until the new season starts !

Looking forward to Knightfall coming back!!