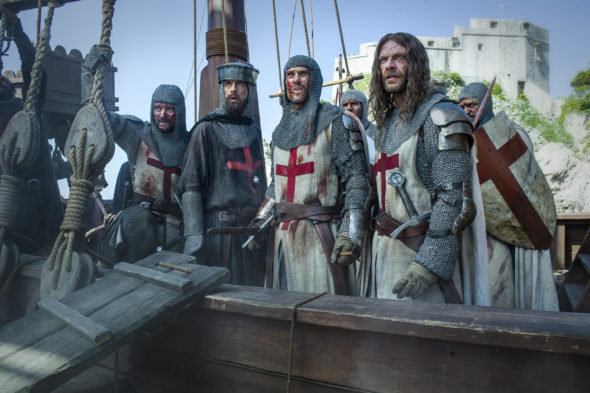 Unlike most of his fellow Templars, Tancrede (Merrells) was once married but abandoned domestic life for the Crusades. Courageous, dedicated, and tenacious, Tancrede values his sacred vows to the order above everything else and believes he should succeed Godfrey as the leader. Their new quest to recover the Grail will reveal to him what part he is meant to play.

His wife, Joan of Navarre (Ross), is both the Queen of France and Queen Regent of Navarre. A powerful woman in her own right, Queen Joan is a caring mother, a daunting diplomat, and a sharp strategist.

Series Finale:
Episode #18 — While I Breathe, I Trust the Cross
The death of the Knights Templar Order is imminent as Landry and his Templar brothers are sentenced to burn at the stake.
First aired: May 13, 2019.

What do you think? Do you like the Knightfall TV series? Should this TV show have been cancelled or renewed for a third season on History?

I loved Knightfall and wished it would have continued with Landry

This show really should be brought back. It’s a great story and the historical aspects are so interesting. Please bring it back for a season III!