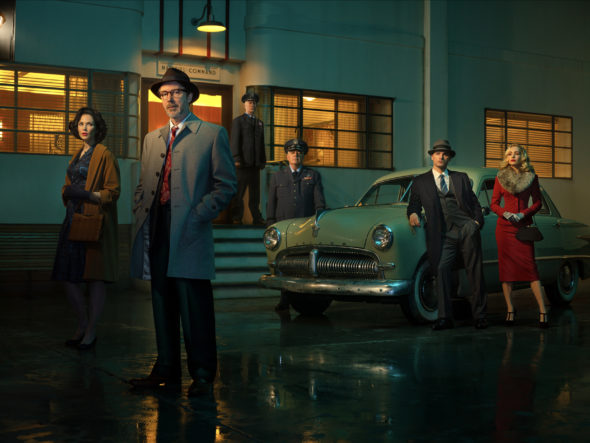 TV show description:
Inspired by the personal experiences of Dr. J. Allen Hynek (Gillen), the Project Blue Book TV series is a scripted drama series, based on the real-life, top-secret investigation into Unidentified Flying Objects (UFOs) and related activity, conducted in the 1950s and ’60s by the United States Air Force.

The story centers on Hynek, a top-notch college professor, married to the loyal Mimi (Mennell). The Air Force recruits Allen to lead its secret operation, code name Project Blue Book. On behalf of the government, he then researches thousands of cases — and hundreds of them still remain unsolved. Each episode uses actual case files and UFO theories, with historical events serving as the backdrop.

Cases explored during the series include the West Virginia Flatwoods Monster Incident; the Fargo, North Dakota Gorman Dogfight; Texas’ Lubbock Lights; and the Chiles-Whitted UFO Incident of Montgomery, Alabama. While delving into these occurrences, it also examines issues including trust, instinct, real news vs. fake, and government coverups, as well as the unknown.

What do you think? Do you like the Project Blue Book TV series? Should this TV show have been cancelled or renewed for a third season on History?

Please Bring ‘Project Blue Book’ back on TV! It should never have been cancelled. We all pray another network will pick the show up and continue the stories. It was a great show and really interesting! I met Dr. J. Allen Hynek back in 1980. He was a very nice guy! I liked the show to see different takes on Dr. Hynek’s beliefs. So, maybe some new Producers looking to Renew and bring back the ‘Project Blue Book’ show could bring in some ‘new’ info on UFO’s? Please bring the show back. ~ Peace, Marc

Why would thd have cancelled this show and leave everyone hanging after the last episode? Bring back the show

Please bring this show back!!! This was the best program on TV!!

Ring this show back!!!! Totally pissed that it was cancelled without any kind of ending. We never missed an episode of this show.

Bring it back for a third season

Project Bluebook rocked…why would it be cancelled???? What a HUGE disappointment!!! BRING IT BACK PLEASE!!!