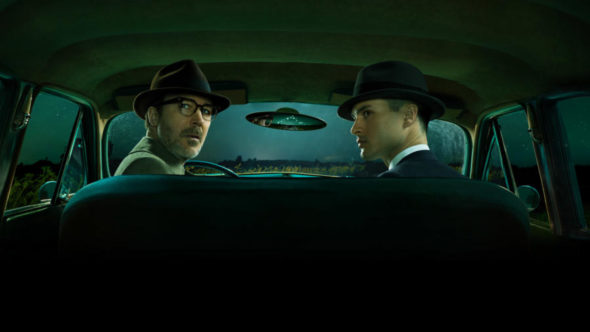 If “The Truth Is Out There”, the History channel is going to spend more time looking for it. They’ve renewed their Project Blue Book TV show for a second season of 10 episodes.

“We are believers in ‘Project Blue Book’ and so is our audience who has sparked a conversation about the hundreds of unsolved cases and our nation’s military response to UFOs that have remained relatively secret until now,” said Eli Lehrer, Executive Vice President and Head of Programming, HISTORY. “Zemeckis, A+E Studios and our extraordinary creative team have shaped a compelling narrative that is the perfect blend of historical authenticity and entertainment that inspires curiosity in our viewers to learn more. We’ve touched on a very relevant topic and look forward to a second season.”

“Project Blue Book” is based on the true, top-secret investigations into Unidentified Flying Objects (UFOs) and related phenomena conducted by the United States Air Force in the 1950s and 60s and stars Aidan Gillen (“Game of Thrones”) and Michael Malarkey (“The Vampire Diaries”). New episodes of “Project Blue Book” air Tuesdays at 10PM ET/PT on HISTORY.

“Project Blue Book” is inspired by the personal experiences of Dr. J. Allen Hynek (Gillen), a brilliant college professor recruited by the U.S. Air Force to spearhead this clandestine operation (Project Blue Book) that researched thousands of cases, over 700 of which remain unsolved to this day. Each episode will draw from the actual case files blending UFO theories with authentic historical events from one of the most mysterious eras in United States history. Throughout the season, true to life, documented occurrences will be explored such as the Flatwoods Monster incident that took place in West Virginia, the Gorman Dogfight of Fargo, North Dakota, the Lubbock Lights of Lubbock, Texas and the Chiles-Whitted UFO Incident of Montgomery, Alabama among many others. Delving into themes such as trust, instinct, real news vs. fake news and government cover-up, “Project Blue Book” straddles the world of science and the exploration of the unknown.

About A+E Studios
A+E Studios is the award-winning studio unit of the global media company A+E Networks, LLC. A+E Studios is an industry leader in the creation, production and distribution of high quality scripted entertainment content across cable, network and streaming platforms. A+E Studios serves as the primary scripted programming provider for the A+E Networks portfolio. A+E Studios’ slate of programming consists of scripted series, event series, and movies. A+E Studios-produced titles include the Peabody Award-winning “UnREAL,” “Project Blue Book” for HISTORY(R), the Emmy-nominated event mini-series “ROOTS,” the action drama “SIX,” the hit series “Knightfall” and “YOU” from Greg Berlanti. Upcoming series slated for release next from A+E Studios include the Jenji Kohan-produced series “American Princess” for Lifetime(R) and the animated drama series “The Liberator” for Netflix.

About HISTORY(R)
HISTORY, a division of A+E Networks, is the premier destination for historical storytelling. From best-in-class documentary events, to a signature slate of industry-leading nonfiction series and premium fact-based scripted programming, HISTORY serves as the most trustworthy source of informational entertainment in media. HISTORY has been named the #1 U.S. TV network in buzz for seven consecutive years by YouGov BrandIndex, and a top favorite TV network by Beta Research Corporation. For a deeper dive, visit history.com or follow @history on Instagram, Twitter and Facebook. For additional press materials visit the A+E Networks Press Center at http://press.aenetworks.com.

What do you think? Did you enjoy watching the first season of Project Blue Book on History? Are you glad that it’s been renewed for season two?

Please bring back project blue book with Ksenia Solo as Susie Miller.
She could act as a turned US agent.
I couldn’t wait for this show to come on.
The only show I really wanted to watch.
The season seemed to go by so fast.
Please bring it back.

I wish u bring back The Son we totally enjoyed it.

I really enjoyed THE SON me & the hubby got the popcorn ready & waited all week for it .Please bring it back on PLEASE !!!!!.

We liked it! It is refreshing to watch something : apolitical, not a redo of an old series, or a (non)reality show or a rerun! Keep up the good work!

We liked it! It’s Refreshing to watch something apolitical, not a redo of an old series, a rerun or (non)reality show.
Keep up the good work!

Absolutely love everything about this show. The selection of all the actors/actresses are perfect for their roles. This is our favorite show and look forward to each episode. We can’t believe how great a show this is, in such a flawed world… where much is wonderful, “but” ~ this show has no “buts” at all. It is a pure joy and we hope it lasts till actual disclosure unfolds. Bravo and congratulations to all who are involved in this production.

Love this one even more than X-Files, and I was an addict to that show. This one uses actual historical events, which sucked me in from episode one. Hurry up with season two please!!!!! I purchased sling just for this show!!! 🙂

We agree with you, Carmon! May they never cancel, because if they do… it will be painful. We enjoy it that much. We just purchased the DVD of Season One just to have it. May they keep going till the real disclosure of aliens and UFOs are revealed… and then… may the same actors/actresses somehow be used in some way to help present them, get to know them, etc.

Loved it. Can’t wait for season 2!