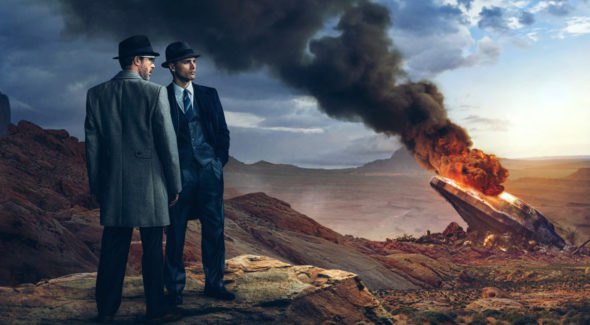 Last season Project Blue Book was History’s highest-rated scripted series. Will it continue to have great success in the ratings or, will it be forgotten by viewers because there are so many TV shows being introduced? Will Project Blue Book be cancelled or renewed for season three? Stay tuned. *Status update below.

A sci-fi historical drama, the Project Blue Book TV series stars Aidan Gillen, Michael Malarkey, Neal McDonough, Michael Harney, Laura Mennell, and Ksenia Solo. The show is inspired by the personal experiences of Dr. J. Allen Hynek (Gillen), a brilliant college professor. He was recruited by the U.S. Air Force to spearhead the Project Blue Book clandestine operation. He’s partnered with Air Force Captain Michael Quinn (Michael Malarkey). In season two, they quest for the truth and delve deeper into themes of global conspiracy, look at how UFOs have impacted the evolution of the nation’s military practices and technology and lean into the nostalgia of the 1950s.

For comparisons: Season one of Project Blue Book on History averaged a 0.31 rating in the 18-49 demographic and 1.67 million viewers.

What do you think? Do you like the Project Blue Book TV series on History? Should it be cancelled or renewed for a third season?

*5/8/20 update: Project Blue Book has been cancelled by History.

We have been watching since the beginning! PLEASE, will some channel pick this up for Season Three? It is a winner-Aidan Gillen IS Professor Hynek! I am hoping he wins the Emmy this year. I am completely shocked that HISTORY caved on continuing this series. Smart, engrossing drama- please get it back on somewhere!