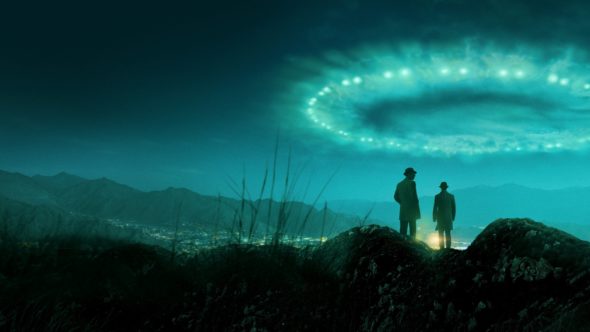 Even though History has cancelled Project Blue Book, Jablonski and O’Leary are shopping a third season to other networks and platforms. During a recent episode of Syfy Wire’s Project Blue Book podcast, the two EPs discussed their efforts to save the show and their season three plans.

We pitched [HISTORY] Season 3 because we actually had a [writers’] room going, and we broke episodes,” O’Leary shares. “What’s so hard for us is that it’d just be such a shame for our fans to not know where it’s going and where we can continue it to go because we’ve already done all that heavy lifting.”

And what are their season three plans? Jablonski says Quinn will be involved:

Obviously, we’re gonna bring Quinn back in early on. He’s an integral part of the show. And I think something important to remember is that UFO sightings peaked worldwide in 1954. It was a global phenomenon.”

Jablosnki also added that if season three does not find a home on TV, there’s always the chance of a graphic novel:

Here’s the thing, we’ve moved so far beyond our Season 2 that we’ve also talked through Season 4. The characters are so great. I could see a version of a book, of a graphic novel, or like a smaller Quibi type version that investigates certain cases.”

What do you think? Are you a fan of Project Blue Book? Do you want a third season?

Oh Come On Please will another Network or History Please Continue this show. I like the walk back into the past and how this is being unraveled for the viewers explaining supernatural events.

It’s never coming back and I got that from the horses mouth. What a waste, it would thrive on HBO MAX.

ABSOLUTELY LOVED the show. The history and topic are fascinating and informative. Please bring it back!!

I am reminded of the “brilliant” idea to cancel firefly when I saw that the “brilliant” minds in charge decided to cancel Project Blue Book. It’s so rare for a GREAT tv show to come along that deserves my attention like Project Blue Book. My heart sank when I found out. I would like to say (with no sarcasm) canceling Project Blue Book is the most idiotic, dumb idea I have ever heard aside from hearing the news about firefly. This is why so many tv shows are worthless. They finally have a good one and dumb people decide to… Read more »

Seasons 3 and 4 should be produced.

I hope that there will be a season 3 and season 4. I really loved watching the show; it was interesting and the cast was great.

Prayers Blue Book finds another option and can have a season 3 and even season 4 I just discovered the show and was looking forward to the next season. It is such an interesting show and with the interest in UFO’s and conspiracies now the show will only find new fans.

yes i want to see a season three of project bluebook. i was facinated by the series. some one pick the show up please!!

I love this show!! Whether you think UFO’s exist or not the misinformation our Government had put together is Super entertaining. Please, Please, Please some network pick this show up!!

Project Blue Book should be brought back.Or is this a case of US government intervention?

Walking dead get 20 years but something actually good gets

Axed typical Hollywood cah rapp
Season 3 a definite season 4 prolly
Let’s get it in and not take 20 years like deadwood or breaking bad.

Blue Book was my favorite show in a very lone time. BRING BACK bLUE bOOK!

PLEASE bring back Project Blue Book! I feel like I’m having Blue Book withdrawal, so make every effort to continue this great show!