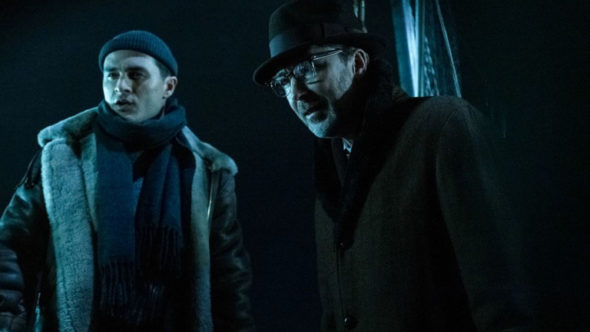 It looks like the Project Blue Book TV series is going MIA. Deadline reports that the scripted TV show has been cancelled after two seasons.

Airing on the History cable channel, the Project Blue Book TV series stars Aidan Gillen, Michael Malarkey, Neal McDonough, Michael Harney, Laura Mennell, and Ksenia Solo. The show is inspired by the personal experiences of Dr. J. Allen Hynek (Gillen), a brilliant college professor. He was recruited by the U.S. Air Force to spearhead the Project Blue Book clandestine operation. He’s partnered with Air Force Captain Michael Quinn (Michael Malarkey). In season two, they quest for the truth and delve deeper into themes of global conspiracy, look at how UFOs have impacted the evolution of the nation’s military practices and technology and lean into the nostalgia of the 1950s.

The second season of Project Blue Book averaged a 0.21 rating in the 18-49 demographic and 1.30 million viewers. Compared to season one, that’s down by 32% in the demo and down by 22% in viewership. The final episode aired on March 24th.

History’s Knightfall has also been cancelled after two seasons so this leaves Vikings as the channel’s only remaining scripted series. That show is currently in its sixth and final season with the final 10 episodes still waiting to be scheduled.

What do you think? Did you enjoy the Project blue Book TV series? Would you have watched a third season on History?

History Channel could have at least concluded the series. The season 2 cliffhanger looks like it’s going unresolved and that sucks.

So disheartening that a superbly crafted (although costly, I’m sure) sci fi show that has filled such a void in our hearts, fate is determined by the almighty advertising dollar, it seems. It was about as close as we’re gonna get to disclosure as we can.

Definitely would have watched a season 3. I really enjoyed the show. I’m disappointed. 🙁

I definitely would have watched the 3 season. Sorry to see it end. It was very entertaining though I have a hard time believing much of what was shown was factual.

Absolutely would have watched season 3.

Yes for sure I would have watched 3rd season. Too bad it’s gone!