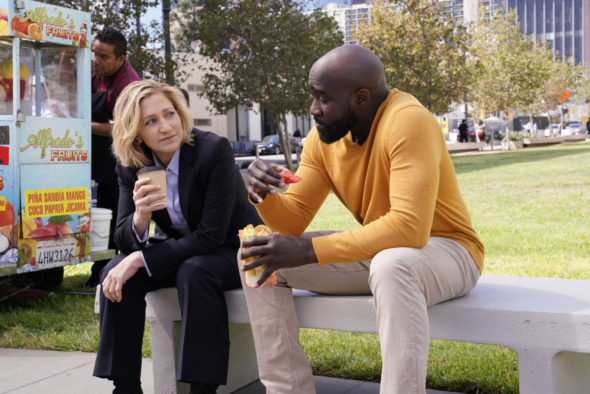 Is the LAPD Chief in over her head in the first season of the Tommy TV show on CBS? As we all know, the Nielsen ratings typically play a big role in determining whether a TV show like Tommy is cancelled or renewed for season two. Unfortunately, most of us do not live in Nielsen households. Because many viewers feel frustration when their viewing habits and opinions aren’t considered, we invite you to rate all of the first season episodes of Tommy here. *Status update below.

What do you think? Which season one episodes of the Tommy TV series do you rate as wonderful, terrible, or somewhere between? Do you think that Tommy should be cancelled or renewed for a second season on CBS? Don’t forget to vote, and share your thoughts, below.

Why was Tommy cancelled? In watched it every week. I love that show. Please bring it back!

A series very connected to what happens in real life. It should never have been cancelled

This show NEEDS TO CONTINUE being written, produced and programmed on SOME Television Network., with all introduced actors/characters.
..It is excellent.

“Tommy” Needs to stay on TV. It is so relevant to our country. WHY would CBS take this off??? That disturbs my Family and many more. Showing real problems and fixing them is excellent to watch for teaching young ones also! Pls reinstate!!

My husband and I… in our 70’s , feel this is a great show And enjoy it tremendously. Please keep it going. It is a WINNER! We NEED this!

Bring Tommy back . It’s one of the better shows on tv ! There are a lot of others programs that could be cancelled . Someone made a high mistake !

I loved Tommy! I was so sad and disappointed to see that it hasn’t been renewed, that’s awful. Edie Falco is awesome and the rest of the cast were very convincing, great actors. Yet they keep these ridiculous game shows, talk shows, reality types… why?? Tommy was an awesome, entertaining show and they should rethink their decision to let it go!!

Tommy is one of my favorite programs. There are only a few that I call, must watch, Tommy was one of them. When episode 11 ended, I told my husband that I hate waiting a week to see the next episode. I liked the guessing game, trying to figure out who in the department was betraying Tommy. If CBS doesn’t reverse there decision, & renew it, hopefully another station will.

Tommy should never have been cancelled. Edie is a superb actress and the show was very close to what really goes on in police departments when a woman is in charge. Each week the show was so engaging that I looked forward to knowing it would be there next Thursday. My friends all loved it too and felt that it is about time TV showed the power of a woman in real life. I do hope it has a second season.

Tommy is entertaining and the storylines grip you and leave you wanting more. Why cancel before giving us more episodes, so others can catch the Tommy bug!