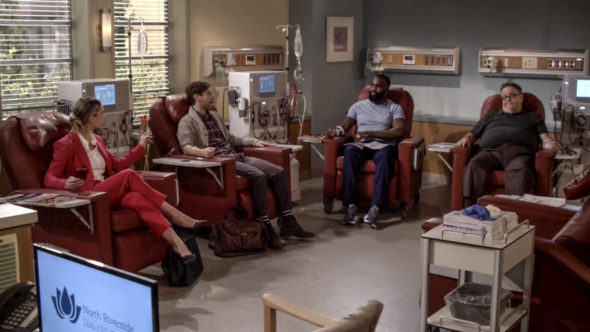 Will viewers find humor in the first season of the B Positive TV show on CBS? As we all know, the Nielsen ratings typically play a big role in determining whether a TV show like B Positive is cancelled or renewed for season two. Unfortunately, most of us do not live in Nielsen households. Because many viewers feel frustrated when their viewing habits and opinions aren’t considered, we invite you to rate all of the first season episodes of B Positive here.  *Status Update Below.

A CBS comedy series, the B Positive TV show stars Thomas Middleditch, Annaleigh Ashford, Kether Donohue, Sara Rue, Izzy G., and Terrence Terrell. The story revolves around a man with B-positive blood who needs an organ transplant and finds an unlikely match. Drew (Middleditch) is a therapist and newly divorced dad who is in need of both a new kidney and a social life. He runs into Gina (Ashford), a rough-around-the-edges former acquaintance from his past who volunteers one of her own kidneys. Together, Drew and Gina form an unlikely and life-affirming friendship, as they begin a journey that will forever affect both of their lives.

What do you think? Which season one episodes of the B Positive TV series do you rate as wonderful, terrible, or somewhere between? Do you think that B Positive should be cancelled or renewed for a second season on CBS? Don’t forget to vote, and share your thoughts, below.

I like the show but have to switch channels when the opening song and creepy graphics come on. Keep the song – get new opening visuals please

Please renew this funny show! My family loves it! Our country needs wholesome humor like this show provides!

I have a family member with kidney disease and it shows the facts of being tied to a machine for treatment. It is funny – sometimes darkly so. I like the cast and I feel it could run for a while. NO Cancellation without a transplant!!