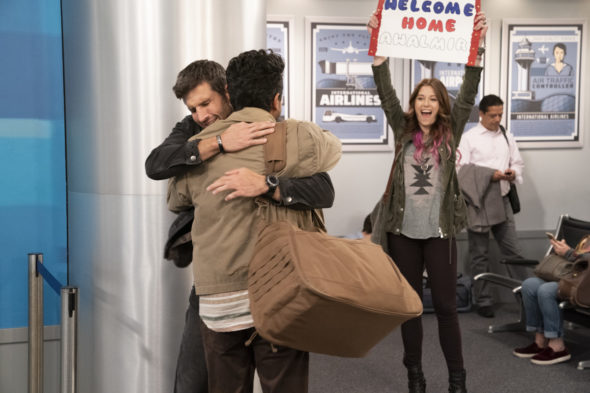 A CBS multi-camera comedy series, the United States of Al TV show stars Adhir Kalyan, Parker Young, Elizabeth Alderfer, Dean Norris, Kelli Goss, and Farrah Mackenzie. The story revolves around the friendship between two men who’ve been through war together. Riley (Young) is a Marine combat veteran who is struggling to readjust to civilian life in Ohio. Awalmir aka “Al” (Kalyan) is the Interpreter who served with Riley’s unit in Afghanistan. After a long struggle to get him a visa to travel to the United States, Riley welcomes Al as he arrives to start a new life.

*5/16/21 update: United States of Al has been renewed for a second season on CBS.

Good show! Funny, serious and all of the characters feel pretty authentic to my wife and I. We are Looking forward to Season Two! Peace, Marc

I really enjoyed this show. Something different that gives pause and thought as to life when a Vet comes home and adding interpreter Al to the mix sharing his culture makes for good TV.

Some funny spots but seems a bit of a slow starter and trying too hard perhaps. I am not sure how I feel yet.

I loved the first episode. We need this kind of show now after our awful last year with the pandemic. Especially with everything going on in this country. This shows 2 men from different cultures who love each other. Hope all the haters will watch it and learn.

I enjoyed the episode last night. I will keep watching if it remains like initial episode. Too soon to tell if I want a Season 2

Watched it last night, looks like it should be comical, and that’s what we are looking for, more comedies, wish they would stop cancelling other really good ones. This world is way too serious, we NEED some laughs in life right now. Hope it makes it. Liked the counseling, it was funny..

It should be renewed. As someone who spent time in Afghanistan, it’s pretty authentic.

Or waste of time CBS network programming from Chuck Lorre