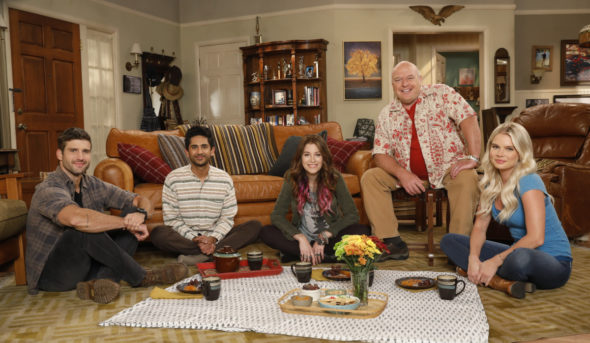 The story revolves around the friendship between two men who’ve been through war together. Riley (Young) is a Marine combat veteran who is struggling to readjust to civilian life in Ohio. Awalmir aka “Al” (Kalyan) is the Interpreter who served with Riley’s unit in Afghanistan. After a long struggle to get him a visa to travel to the United States, Riley welcomes Al as he arrives to start a new life.

What do you think? Do you like the United States of Al TV show? Do you think it should have been cancelled or renewed for a third season?

This was a great show without violence and normal daily life. Loved the show.

CBS blows. I WILL NOT BE watching any new shows, what’s the point?

Will really miss the united states of al. One of my favorites. Also enjoyed B Positive. I will no longer be looking forward to Thursday night TV. Was my favorite due to the four great sitcoms

One of the best shows on TV today. Why do the really good ones always get canceled? The network should really reconsider this one.

I love this show its so funny I hope they keep this show on. Anyone who has not watched it yet needs to, with mom leaving this show will take over, love it.

Oh good grief another one off Chuck Lorre Low class laugh track piece of crap. I think this network is trying to save money by making one or producer or directors mainly on all the productions over that network is the reason why this is continuing. There’s no reason for this to occur with Chuck Lorre Continuing to dominate. He’s not good he’s just average he just makes fun of people either with disabilities any camps or insulting people with somewhat note all type of smart a”” people. There’s enough do you want to change

This is a well written show the actors are great.