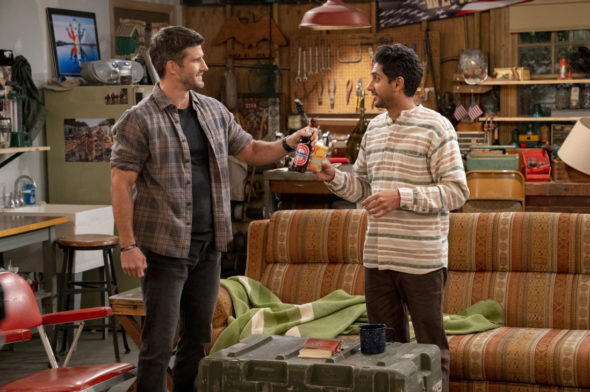 Riley and Al are making it to season two. CBS has renewed the buddy sitcom United States of Al for the 2021-22 television season.

A multi-camera comedy series, the United States of Al TV show stars Adhir Kalyan, Parker Young, Elizabeth Alderfer, Dean Norris, Kelli Goss, and Farrah Mackenzie. The story revolves around the friendship between two men who’ve been through war together. Riley (Young) is a Marine combat veteran who is struggling to readjust to civilian life in Ohio. Awalmir aka “Al” (Kalyan) is the Interpreter who served with Riley’s unit in Afghanistan. After a long struggle to get him a visa to travel to the United States, Riley welcomes Al as he arrives to start a new life.

Airing on Thursday nights, the first season of United States of Al averages a 0.56 rating in the 18-49 demographic and 5.24 million viewers. It’s a middle-of-the-pack performer when compared to CBS’ other scripted series. Seven of the season’s 13 episodes have aired thus far.

Check out our CBS status sheet to track the Tiffany network’s new series pickups, renewals, and cancellations. You can find lists of cancelled shows here.
What do you think? Have you enjoyed watching the United States of Al TV series? Do you plan to tune in for the second season?

Love the show US of Al!