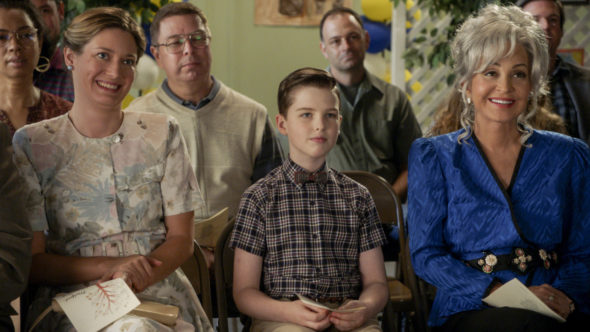 Airing on Thursday nights, Young Sheldon stars Iain Armitage, Zoe Perry, Lance Barber, Annie Potts, Montana Jordan, Raegan Revord, Matt Hobby, and Jim Parsons (narration). Recurring cast members include Wallace Shawn, Craig T. Nelson, Ryan Phuong, Wyatt McClure, Danielle Pinnock, and Rex Linn. Revolving around the early life of The Big Bang Theory’s Sheldon Cooper (Parsons), this comedy series follows a gifted and naive young Sheldon (Armitage) as he navigates his way through life while living with his very normal Texas family. Sheldon’s father, George (Barber), struggles to find his way as a high school football coach and as father to a boy he doesn’t understand. Sheldon’s mother, Mary (Perry), fiercely protects and nurtures her son in a town where he just doesn’t fit in. Sheldon’s older brother, Georgie (Jordan), does the best he can in high school. Sheldon’s twin sister, Missy (Revord), sometimes resents all the attention Sheldon gets, but also remains the one person who can reliably tell her brother the truth. Sheldon’s beloved Meemaw (Potts), his foul-mouthed, hard-drinking Texas grandmother, is very supportive of her grandson and his unique gifts.

The fourth season of Young Sheldon averages a 0.81 rating in the 18-49 demographic and 7.33 million viewers. Compared to season three, that’s down by 23% in the demo and down by 16% in viewership. The show is the network’s highest-rated comedy series.

“Under Chuck Lorre’s and Steve Molaro’s deft leadership, this superb cast and gifted writers have truly brought these wonderful characters to life,” said Kelly Kahl, President, CBS Entertainment. “YOUNG SHELDON dominates the broadcast comedy landscape by over +2.5 million viewers and is the lynchpin of CBS’ top-rated Thursday comedy lineup. The humor, warmth and heart exuded by the Cooper family is an undeniable hook for the millions of fans who tune in each week. We’re excited to see what the next three seasons have in store for a slightly older Sheldon and all the Coopers.”

What do you think? Do you like watching the Young Sheldon TV series? Do you plan to tune in for season five? Do you think this three-season renewal is a good idea?

I really enjoy this show. I’m currently watching reruns. I’m excited to know it has been given another 3 years!