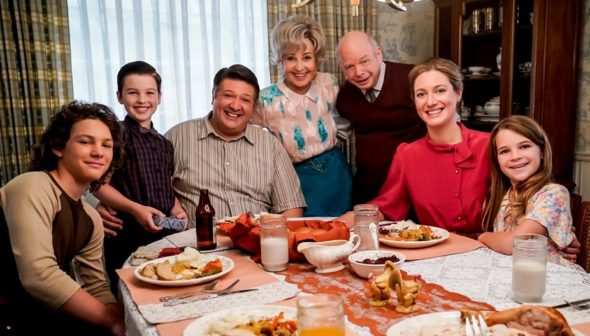 How much will Sheldon grow in the third season of the Young Sheldon TV show on CBS? As we all know, the Nielsen ratings typically play a big role in determining whether a TV show like Young Sheldon is cancelled or renewed for season four. Unfortunately, most of us do not live in Nielsen households. Because many viewers feel frustration when their viewing habits and opinions aren’t considered, we invite you to rate all of the third season episodes of Young Sheldon here.

A CBS single-camera family comedy series, Young Sheldon stars Iain Armitage, Zoe Perry, Lance Barber, Annie Potts, Montana Jordan, Raegan Revord, Matt Hobby, and Jim Parsons (narration). Recurring cast members include Sarah Baker, John Hartman, and Jayne Taini. Revolving around the early life of The Big Bang Theory’s Sheldon Cooper (Parsons), this comedy series follows a gifted and naive young Sheldon (Armitage) as he navigates his way through life while living with his very normal Texas family. Sheldon’s father, George (Barber), struggles to find his way as a high school football coach and as father to a boy he doesn’t understand while Sheldon’s mother, Mary (Perry), fiercely protects and nurtures her son in a town where he just doesn’t fit in. Sheldon’s older brother, Georgie (Jordan), does the best he can in high school, but it’s tough to be cool when you’re in the same classes with your odd younger brother. Sheldon’s twin sister, Missy (Revord), sometimes resents all the attention Sheldon gets, but also remains the one person who can reliably tell Sheldon the truth. Sheldon’s beloved Meemaw (Potts), his foul-mouthed, hard-drinking Texas grandmother who is very supportive of her grandson and his unique gifts.

What do you think? Which season three episodes of the Young Sheldon TV series do you rate as wonderful, terrible, or somewhere between? Do you think that Young Sheldon on CBS should have been renewed for a fourth season? Don’t forget to vote, and share your thoughts, below.

Please keep it going, it gets better all the time. We love this comedy and sure hope it doesn’t get cancelled. WE want to see it Last for years. Get Meemaw back with Dr.Sturgis, LET’s sEE A bit MORE of the Pastor And his new Wife, plus more of Sheldon and missy doing things together. But keep it going. 🙂

Reba McIntyre and Annie Potts are a riot together! Lets have more of them!

cancel this show, cbs is ending hawaii five- o and thats a mistake dont make a second mistake and keep this show on