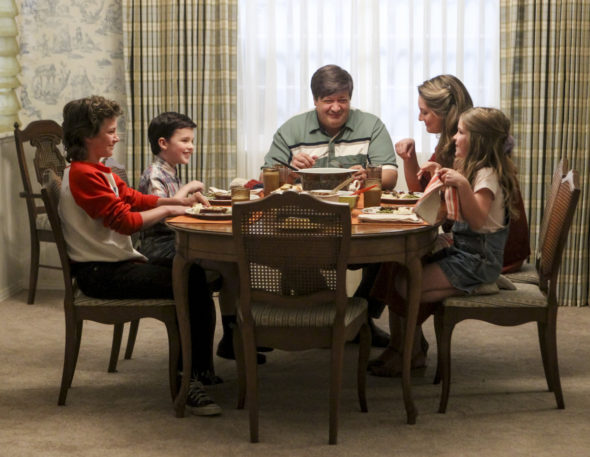 How does Sheldon Cooper make out in the first season of the Young Sheldon TV show on CBS? As we all know, the Nielsen ratings typically play a big role in determining whether a TV show like Young Sheldon is cancelled or renewed for a second season. Unfortunately, most of us do not live in Nielsen households. Because many viewers feel frustration when their viewing habits and opinions aren’t considered, we’d like to offer you the chance to rate all the season two episodes of Young Sheldon for us here.

A CBS sitcom, Young Sheldon stars Iain Armitage, Zoe Perry, Lance Barber, Annie Potts, Montana Jordan, and Raegan Revord, with Jim Parsons narrating. The Big Bang Theory prequel unfolds in 1989 and centers on Sheldon Cooper (Armitage), when he was just a nine-year-old boy. Surviving childhood in an East Texas outpost — one dedicated to all things faith and football — will be no mean feat for this unique genius and his otherwise ordinary family.

What do you think? Which season one episodes of Young Sheldon TV series do you rate as wonderful, terrible, or somewhere between? Should CBS has cancel or renew Young Sheldon for season two? Don’t forget to vote, and share your thoughts, below.

Young Sheldon is a funny comedy and should be continued until this character becomes an adult.

Thanks for the show. Its Really Great. Please dont Cancel it. We Love it alot alot

Found this show to be hysterical! The actor portraying Sheldon does an amazing job.

Quite entertaining, love the actor who plays young Sheldon.

We like this show! It’s a funny, clean, family show. Never watched Big Bang. Love all the characters, especially Meemaw. They work together for a fun half-hour. Keep it on!

LOVE, LOVE, LOVE….YOUNG SHELDON Is so funny, but it also has it’s serious moments too. It really shows how life actually was in those days. A much gentler quieter time. A time where shows weren’t all blood gore and sex. This is one Hilarious show, that we really look forward too. REALLY FUNNY. Keep renewing it.