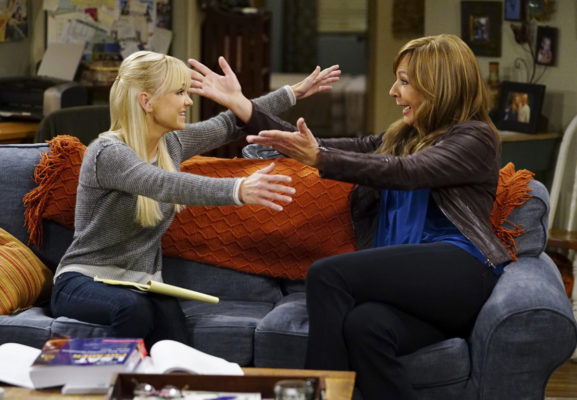 Are Christy and Bonnie still walking the walk during the fifth season of the Mom TV show on CBS? As we all know, the Nielsen ratings typically play a big role in determining whether a TV show like Mom is cancelled or renewed for season six. Unfortunately, most of us do not live in Nielsen households. Because many viewers feel frustration when their viewing habits and opinions aren’t considered, we’d like to offer you the chance to rate all the Mom season five episodes here.

A CBS sitcom, Mom stars Anna Faris, Allison Janney, Jaime Pressly, Matt Jones, Sadie Calvano, Blake Garrett Rosenthal, Mimi Kennedy, Beth Hall, and William Fichtner. The series centers on Christy (Faris), a single mom in recovery who has moved back in with her own single, recovering mother, Bonnie (Janney). Bonnie’s attempts to make up for her failings can try Christy’s patience. After all, she’s busy working on her relationships with her own kids and their father and working toward a new career. Meanwhile, Bonnie is learning how to forge healthy relationships and still wonders what she’ll be when she grows up. Together, and with the help of AA, Christy and Bonnie spot one another along the road to recovery.

What do you think? Which season five episodes of the Mom TV series do you rate as wonderful, terrible, or somewhere between? Should CBS cancel or renew Mom for a sixth season? Don’t forget to vote, and share your thoughts, below.

please keep showing mom! Keep it on the air for more shows

Keep Mom on Love the show Funny,Funny A Great Comedy Can’t wait to see the next show The best

I absolutely love mom. I hope there are lots more seasons. I do wish it was on TV land instead of teachers. I watch mom all the time. I have it recorded it so when it’s not on I can watch my recordings.

Teachers is Horrible! Mom is a great show and I’ve been watching since day 1

WANT MOM TO COME BACK ON EVERY NIGHT ON TV LAND.
TEACHERS SHOULD BE CANCELED. VERY BAD SHOW.

Favorite all time show!!! This show has influenced my life in so many ways, I’m so grateful for every episode!!! I hope this show last MANY MORE SEASONS!!!!! <3

i love this show!! And the reruns now playing on other channels shows that its a hit, right? If it aint broke fellas! It was hard to see the focus come off the family situation but I had to look at how the kids were, or were not impacting the show. I miss Violet (a little LOL) and Roscoe (sleeping in the closet) and Baxter but NOT his fiance (did they get married yet?) and because I cant stand her, she is doing a GREAT job at being the villain so again, a hit! Just the alchy ladies makes it… Read more »

BEST. SHOW. EVER! I started watching because I LOVE Anna but Allison janet is right up there with her and funny as hell. PLEASE DONT CANCEL THIS SHOW!!!

One of the funniest shows to date…it’s a keeper!

Please renew!!!! I live for this show!!Love the laughs!! Best show on TV!!

Mom is funny to watch, usually entertaining. Cut down on raunchy comments, sometimes they go over the boundaries. Please renew.

I gave season 5 a 9/10. The only reason why I did this is cause I miss Violet & Rosco. The show used to be the relationship between Mom Bonnie & daughter Christy & also about Mom Christy & her children Violet & Rosco. Somewhere along the way the kids were forgotten & now it’s just Bonnie & Christy. Don’t get me wrong, the duo make me laugh harder than any other show & I look forward to it. Especially being a child of an alcoholic/addict (my dad) & being one myself. Bonnie & Christy remind me of us in… Read more »

I miss them too! I related so much with everyone and really miss the kids, even her ex-husband was a great part of the show!