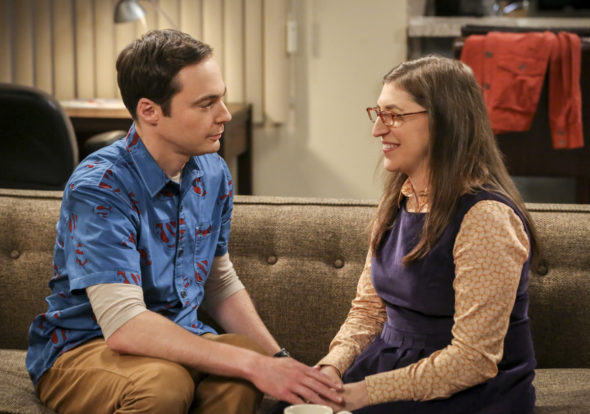 How well do Sheldon, Leonard, and the crew handle life outside the lab, in season 11 of The Big Bang Theory TV show on CBS? As we all know, the Nielsen ratings typically play a big role in determining whether a TV show like The Big Bang Theory is cancelled or renewed for a 12th season. Unfortunately, most of us do not live in Nielsen households. Because many viewers feel frustration when their viewing habits and opinions aren’t considered, we’d like to offer you the chance to rate all the season 11 episodes of The Big Bang Theory for us here.

What do you think? Which season 11 episodes of The Big Bang Theory TV series do you rate as wonderful, terrible, or somewhere between? Are you happy CBS has renewed The Big Bang Theory  for a season 12? Don’t forget to vote, and share your thoughts, below.

Could never tire of this entertaining show.

Love this show. I didn’t start watching until last year. I have been catching up on reruns. An adult webcam model from the Republic of Colombia loves this show and got me interested in seeing it. I am very glad she did.

after 11 seasons, the show is still relevant, funny, and a keeper. I hate to say that it may be nearing its close, so keep that in mind and make it an ending that we will love. So funny and beloved from day one, to its final… ‘scene’

I no longer enjoy this show, the friendly banter amongst good friends has long since turned into cruel jokes, humiliation and bullying. I find most of the characters unlikable. unkind and mean spirited.

Never never never kill this show! It’s hilarious lmao! I love it and so does my 78 year old mom. We’re 1000mi. apart, but this is one show we watch on mon or thur (depending on the time of the year), nights. It continues to surprise me with the hook ups, progressions is relationships, and babieSSSS!!!

Dump this and also Superior donuts, 2 unfunny, stupid shows. This has been on 6 years too long. Dump it! CBS, we watch nothing on your network since you cancelled the girls!

ive always loved the big bang theory .I like all the gang but feel stuart should only be in some episodes not all of them .for me he is ruining it

The Big Bang Theory is far past its prime. There has not been a good episode since season 5. The addition of characters has detracted from the primary topic. Amy should have been written off the show after about three episodes. Bernadette should have left years ago and went to live on a commune in Canada. Still cannot figure Penny out. How can a barely educated farmgirl get a job as a pharmaceutical representative. Those jobs require degrees in Chemistry. Raj should go back to India and work for his father. Maybe he can find a woman there. There must… Read more »