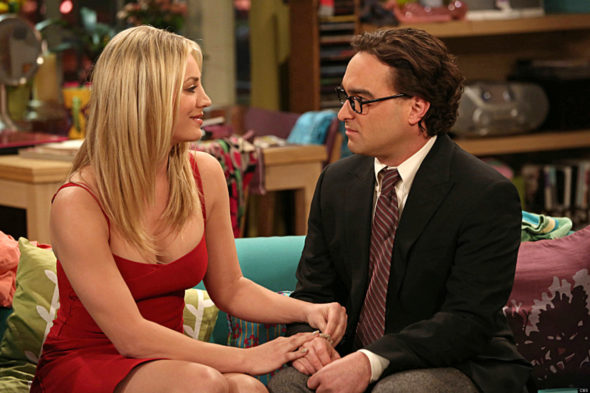 The Big Bang Theory has already been renewed through season 12, but will that be the end? According to The Hollywood Reporter, talks are underway to renew the CBS TV show for a 13th season.

Per THR, CBS and The Big Bang Theory‘s producing studio Warner Bros. TV are in talks to continue the hit series beyond season 12. However, nothing official has been settled yet.

We know we have season 12; we don’t know what we have beyond there. Our goal of doing season 12 is to not leave anything on the table. If this is going to be the end, they should tout it as the final season, but I’m not sure when we’ll have a definitive answer on that.”

What do you think? Do you watch The Big Bang Theory? Do you want a 13th season?

I want it to continue, it is no longer just a sit-com, it has progressed past that, it is now a funny soap, all sit-com’s go like that, it is because we are more interested in the characters than the jokes but this has the potential to carry on for a few more seasons because there are so many avenues that the writers can take. Such as, Penny’s horror at losing her lovely body by being pregnant and Leonard being as proud as punch that his baby makers work, Raj finally getting the girl of his dreams, Lucy (the wonderful… Read more »

After reading all the other posts I can’t agree more. It is one of the best shows on today and I will have the reruns forever. Thank you I had to get that to post I hope posting twice was ok.

I would really like to see this show go on for several more seasons. It is one of the best clean comedy shows on TV that me and my husband watch together. And I know everyone has a difference of opinion in what they like to watch, but as for me and my family and siblings this is our #1 show !!

i don’t understand people keep saying should be end long time ago r guys crazy
there is nothing really good like this show on the past few years literally nothing please just give a name of one comedy tv show as good as tbbt
u will never find so to who lost their minds please be quiet no body force u to watch it and leave us with our best comedy tv show on the last 11 years
i just wish this show to be on tv for ever.

Nope, it should end at high note not phase out. The only reason FRIENDS is relevant even now is because they ended it on a high note. season 13 will ruin it, season 11 was a drag. funny but drag.

My #1 All-Time favorite show, I NEVER get tired of watching it along with It’s reruns!! The cast of characters is amazing in how they interact with one another, I personally hope it keeps going forever, but if it should end we will always have the reruns, which I could just keep watching over & over!!

I gave up on this years ago and occasionally check back in. Each time I do, I find the show worse than before.

I think there should be a 13th season of Big Bang, and maybe even more. I would love to see the gang continue and add babies to the cast. I understand the actors wanting to end the show, but how about the viewers. This is one of the best shows ever on network TV.

Want to see this show go on and on. Meet their kids!

I think after Season 12, it will have taken its course and I’m pretty sure that the people who act on the show will have done their jobs by then!

Keep keep keep The Big Bang!
You’ve hit the nail on the head with this one!

It needs to end. Hasn’t been good since season 6.

Yes! Keep it going! It’s the best comedy on TV. It never disapoints!

Love this show. Keep it going

I agree! I want to see Penny and Lenard have kids. We even watch the re runs hate to see this show end it’s crazy at times but we love watching it! I really hope this show continues!