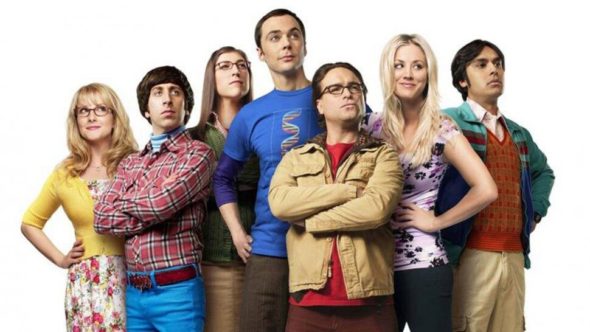 TV show description:
Leonard Hofstadter (Johnny Galecki) and Sheldon Cooper (Jim Parsons) are best friends, roommates, and brilliant physicists at CalTech. They understand how the universe works but have little interest in the people around them.

That begins to change when an attractive young waitress and wanna-be actress, Penny (Kaley Cuoco), moves into the apartment across the hall. Leonard becomes immediately smitten with the free-spirited girl and tries to forge a relationship with her, much to the confusion and consternation of Sheldon.

The geniuses’ equally geeky coworkers are smarmy Howard Wolowitz (Simon Helberg) and Rajesh Koothrappali (Kunal Nayyar), an immigrant from India who finds it difficult to talk to most females.

Series Finale:
Episode #279 — The Stockholm Syndrome
Bernadette and Wolowitz leave their kids for the first time; Penny and Leonard try to keep a secret; Sheldon and Amy stick together; and Koothrappali makes a new friend, as the gang travels together into an uncharted future.
First aired: May 16, 2019.

What do you think? Do you like The Big Bang Theory TV show? Do you think it should have ended or been renewed for a 13th season?

I feel the show had run its course, and it was time to end. The story lines were getting thin and weaker. The Characters were still strong playing as likable friends, but the writers seemed to run out of steam. The final season should have just been more of the shows we have come to enjoy. With a finale just a last regular themed show just like they would end a regular season, without the drama.

Could’ve wrote off Sheldon (i think Jim Parsons was done-Prbly since doing the spin off, young Sheldon) had him go back to Tx for family issues. The rest of the crew could’ve played it off as they had spoke with him. Even if they extended the show for half a season, to see where it went, or how it was going