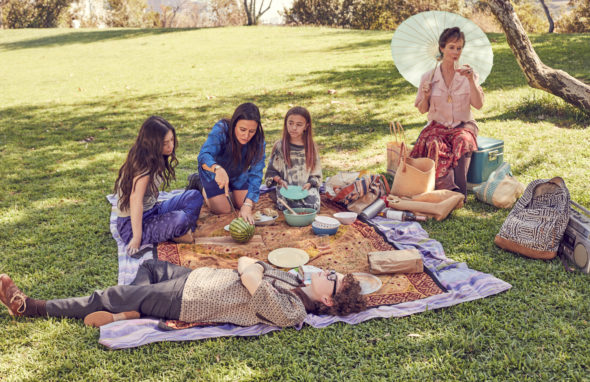 Are things better or worse for Sam, during the third season of the Better Things TV show on FX? As we all know, the Nielsen ratings typically play a big role in determining whether a TV show like Better Things is cancelled or renewed for season four. Unfortunately, most of us do not live in Nielsen households. Because many viewers feel frustration when their viewing habits and opinions aren’t considered, we’d like to offer you the chance to rate all of the Better Things season three episodes here. *Status update below.

An FX black comedy, Better Things stars Pamela Adlon, Mikey Madison, Hannah Alligood, Olivia Edward, Celia Imrie, Rebecca Metz, and Alysia Reiner. Sam (Adlon) is a divorced woman without a filter, who’s just trying to raise her three daughters — teenager Max (Madison), eccentric Frankie (Alligood) and spicy Duke (Edward). She also has to keep an eye out on her mother, Phil (Imrie). Sam fills the roles of dad, referee, and the cops, as well. If only she could find a little time to live her own life, too.

What do you think? Which season three episodes of the Better Things TV series do you rate as wonderful, terrible, or somewhere between? Should FX cancel or renew Better Things for a fourth season? Don’t forget to vote, and share your thoughts, below.

*3/26/19 update: FX has renewed the Better Things TV show for a fourth season.

Love this show! So happy to watch new episodes. I just discovered it a few months ago so was watching reruns which were new to me. I can relate to Samantha on various levels. Season 3 is a winner thus far.

Better Things is one of the best, most original shows on. Please keep it going! Pamela Adlon is amazing, and I want to see more of this show!