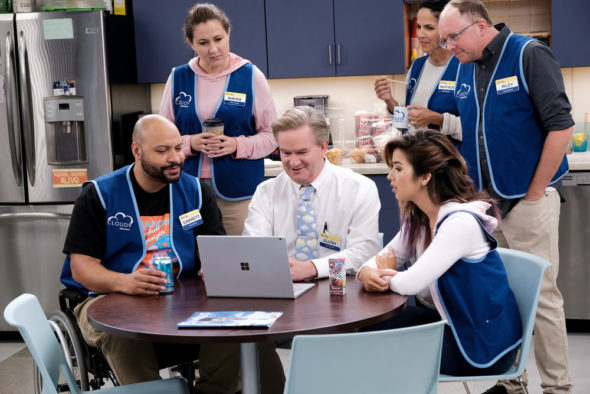 Attention shoppers: should the Cloud 9 superstore remain open for business? As we all know, the Nielsen ratings typically play a big role in determining whether a TV show like Superstore is cancelled or renewed for season five. Unfortunately, most of us do not live in Nielsen households. Because many viewers feel frustration, when their viewing habits and opinions aren’t considered, we’d like to offer you the chance to rate of the episodes in the fourth season of Superstore here. *Status update below.

Airing on the NBC television network, Superstore stars America Ferrera, Ben Feldman, Colton Dunn, Nico Santos, Nichole Bloom, Mark McKinney, and Lauren Ash. This workplace sitcom revolves around the diverse employees at a super-sized megastore called Cloud 9. Amy (Ferrera) is the glue that holds the place together while newer hire Jonah (Feldman) wants to prove that work doesn’t have to be boring. From bright-eyed newbies and seen-it-all veterans to the clueless seasonal hires and the in-it-for-life managers, the crew tackles the day-to-day grind of rabid bargain hunters, riot-causing sales, and nap-worthy training sessions.

What do you think? Which season four episodes of the Superstore TV series do you rate as wonderful, terrible, or somewhere between? Should NBC renew the Superstore show for a fifth season? Don’t forget to vote, and share your thoughts, below.

*3/4/19 update: NBC has renewed the Superstore series for a fifth season.

Please renew superstore. It’s the only show I watch anymore on tv !

I hooked love it witty and sometimes ture

Omg, love this show and I love Eden Sher you need to make Penny a REGULAR! <3

Superstore is hilarious!!! Love it!

who is the idiot who programmed Superstore up against Big Bang Theory ? that is suicide against a very excellent show

Superstore is funny but the jokes about sex are not