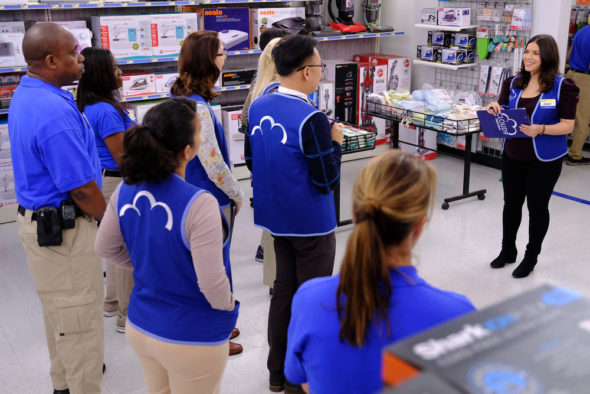 Is the Cloud 9 gang still on the clock? Has the Superstore TV show been cancelled or renewed for a fifth season on NBC? The television vulture is watching for the latest cancellation and renewal news, so this page is the place to track the status of Superstore, season five. You can bookmark this page or subscribe for the latest updates. Remember, the television vulture is watching your shows. Are you?

An NBC workplace comedy, Superstore stars America Ferrera, Ben Feldman, Colton Dunn, Nico Santos, Nichole Bloom, Mark McKinney, and Lauren Ash. This sitcom revolves around the diverse employees at a super-sized megastore called Cloud 9. Amy (Ferrera) is the glue that holds the place together while newer hire Jonah (Feldman) wants to prove that work doesn’t have to be boring. From bright-eyed newbies and seen-it-all veterans to the clueless seasonal hires and the in-it-for-life managers, the crew tackles the day-to-day grind of rabid bargain hunters, riot-causing sales, and nap-worthy training sessions.

The fourth season of Superstore averaged a 0.83 rating in the 18-49 demographic and 3.06 million viewers. Compared to season three, that’s down by 18% and 17%, respectively. Compare its standing against the other NBC TV shows we are tracking.

Will NBC cancel or renew Superstore for season five? The numbers are down but I think they’ll renew it, in order to have a bigger syndication package. If the ratings really tank, all bets are off. For now, I’ll keep an eye on the Nielsens and update this page with breaking developments. Subscribe for free updates on any Superstore cancellation or renewal news alerts.

3/4/19 update: NBC has renewed the Superstore series for a fifth season.

What do you think? Did you think that the Superstore TV show would be renewed for a fifth season? How would you feel if NBC had cancelled this TV show, instead?

It’s been a long time since I found a show worth watching. Please bring back Superstore for a 5th Season. You guys won’t regret it!

Chill out we need 5th season. If numbers are down it’s because we stream on hulu

Must RENE or my husband will be DEVASTATED!!!

PLEASE renew! We have been waiting for the next season, such a great cast!

A 5th season if it’s the last, then a 1 hour finale gives them 100 shows for syndication. They just need to renew one more and they’ll for sure get 100 that way. Should of course they opt to leave it at 77, that makes it on the bubble for syndication. I really think it’s got a 80% chance at being renewed, NBC can’t be that stupid, not being so close to a prime syndication package. Hoping it could go as long as 10, but those are super rare now, 5 to 7 is what you typically see for comedies… Read more »

Renew it PLEASE! So good! It’s my favorite sitcom. I love every character.

RENEW! It’s one of the best sitcoms on the air!