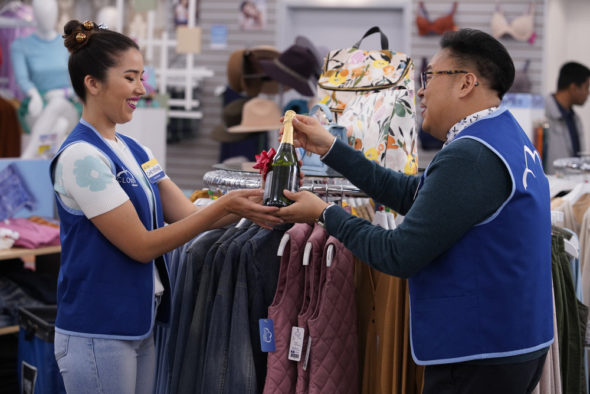 When will the Cloud 9 doors close for good? Has the Superstore TV show been cancelled or renewed for a seventh season on NBC? The television vulture is watching all the latest cancellation and renewal news, so this page is the place to track the status of Superstore, season seven. Bookmark it, or subscribe for the latest updates. Remember, the television vulture is watching your shows. Are you?

Airing on the NBC television network, Superstore stars Ben Feldman, Mark McKinney, Lauren Ash, Colton Dunn, Nico Santos, Nichole Sakura, and Kaliko Kauahi. This sitcom revolves around the diverse and unique employees at a big-box megastore called Cloud 9. At the center is Jonah (Feldman), a passionate optimist always looking out for his co-workers. They include the sardonic Garrett (Dunn), the sweet and fun-loving Cheyenne (Sakura), and the perpetually dismissed Sandra (Kauahi). Back in the manager job is Glenn (McKinney), who once again finds himself butting heads with aggressive assistant manager Dina (Ash). Glenn is now assisted by Mateo (Santos), who’s pretty sure he would be running things by now if it weren’t for his undocumented status. From bright-eyed newbies to seen-it-all veterans to the clueless seasonal hires and the in-it-for-life managers, the crew tackles the day-to-day grind of rabid bargain hunters, riot-causing sales, and nap-worthy training sessions.

The sixth season of Superstore averaged a 0.47 rating in the 18-49 demographic and 2.27 million viewers. Compared to season five, that’s down by 34% in the demo and down by 20% in viewership. Find out how Superstore stacks up against other NBC TV shows.

Will NBC cancel or renew Superstore for season seven? Though America Ferrara has departed, I have no doubt that this sitcom will remain one of the network’s sitcom anchors. Unless the ratings take a big dive, I’m confident that Superstore will be renewed. I’ll update this page with breaking developments. Subscribe for free alerts on Superstore cancellation or renewal news.

12/4/20 update: Superstore has been cancelled by NBC so, there won’t be a seventh season.

What do you think? Were you hoping that the Superstore TV show would be renewed for a seventh season? Are you sorry that NBC cancelled this TV series, instead?

aahhhh i really want a seson 7