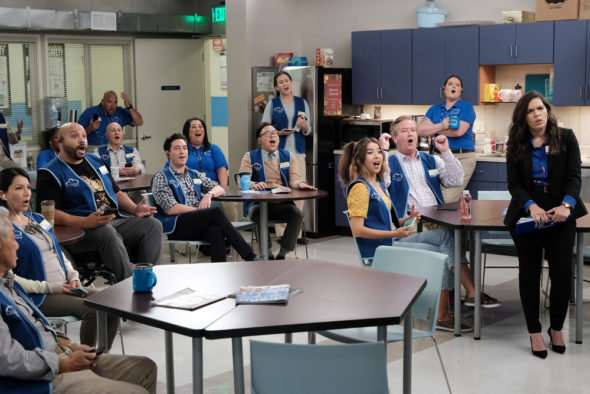 Attention shoppers! NBC has announced that the Superstore TV show has been renewed for a sixth season. The fifth season is currently airing (14 installments have run so far) and season six will air as part of the 2020-21 season (which kicks off in the fall).

“We’re thrilled that ‘Superstore’ continues to speak to many important and topical issues while simultaneously being hilarious,” said Lisa Katz and Tracey Pakosta, Co-Presidents of Scripted Programming, NBC Entertainment.

In its fifth season, “Superstore” is averaging a 1.1 rating in adults 18-49 and 3.8 million viewers overall in “live plus seven day” Nielsens. The season premiere has surged to a 3.4 in 18-49 and 7.5 million viewers when viewing on all platforms is counted, four times the episode’s next-day “live plus same day” 0.8 rating in 18-49.

“Superstore” continues to rank as one of NBC’s strongest digital performers, generating 50% of its “live plus 35 day” 18-49 average this season from digital sources, tying “The Good Place” as NBC’s most digital series so far this season.

In addition to having won several awards, the show has long been a critical favorite, with Slate saying this season, “‘Superstore’ is the only show that gets what it’s like to be working class in America.”

What do you think? Do you like the Superstore TV show on NBC? Are you glad that it’s been renewed for a sixth season?

NBC has taken off so many good shows and has left this one on all these seasons. How awful. Never giving any other new shows more than 10 episodes before cancelling

It should have been renewed for a few more years. Superstore has finally hit its stride. Upping Sandra to a main character was a smart move!

They cancelled Telanovela, a fabulous show for this drivel. It is an awful thing, so of course NBC kept it.