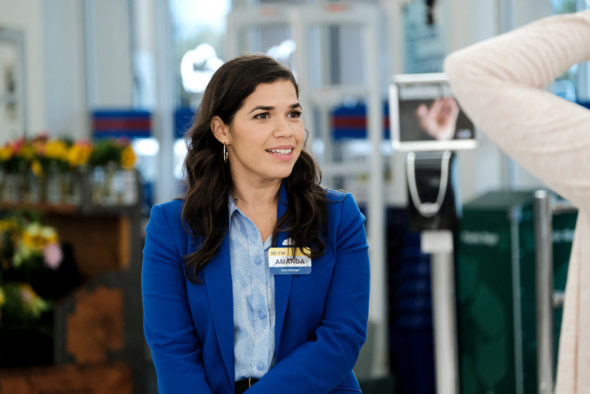 Is every day a sale day on the fifth season of the Superstore TV show on NBC? As we all know, the Nielsen ratings typically play a big role in determining whether a TV show like Superstore is cancelled or renewed for season six. Unfortunately, most of us do not live in Nielsen households. Because many viewers feel frustration when their viewing habits and opinions aren’t considered, we invite you to rate all of the fifth season episodes of Superstore here. *Status update below.

What do you think? Which season five episodes of the Superstore TV series do you rate as wonderful, terrible, or somewhere between? Do you think that Superstore on NBC should be cancelled or renewed for a sixth season? Don’t forget to vote, and share your thoughts, below.

*2/11/20 update: NBC has renewed the Superstore TV show for a sixth season.

In Englerdom I stumbled across Superstore quite by accident. I was immediately smitten by it and thought it was easily as good as Big Bang. I wondered why it was on in the morning and on a minor channel and not on a major channel in the evening. Why doesn’t ITV 2 not promote it, has it suffered the same non-promotion in The States?

This is one of my favorite shows! Every episode is just as funny as the last one.