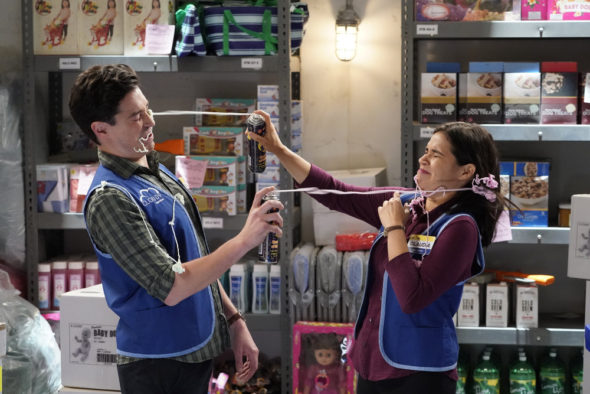 Confetti cleanup in aisle nine. NBC has renewed its Superstore TV show for a fourth season. Star America Ferrara has released a video of the cast and crew getting the good news. Watch it, below. The gang at the Cloud 9 megastore sure seems thrilled at the chance to return and serve your needs (after they take care of their own).

An NBC sitcom, Superstore also stars Ben Feldman, Colton Dunn, Nico Santos, Nichole Bloom, Mark McKinney, and Lauren Ash. This sitcom revolves around the diverse employees at a super-sized megastore called Cloud 9. Amy (Ferrera) is the glue that holds the place together while Jonah (Feldman) wants to prove that work doesn’t have to be boring.

After a moment of celebration, you can hear Ferrara jokingly ask departing NBC Exec Jennifer Salke, “But is This Is Us coming back?” Check it out. (By the way, This Is Us was renewed through season three, in January of 2017, so America and Ms. Ferrara can rest easy.)

Superstore: A Look at the Ratings

The third season of Superstore on NBC is averaging a 1.13 rating in the 18-49 demographic with 4.09 million viewers. Compared to season two, that’s even in the demo and up by 4% in total viewers. Compare its standing against the other NBC TV shows we are tracking.

Check out the NBC press release on the Superstore fourth season renewal for more. 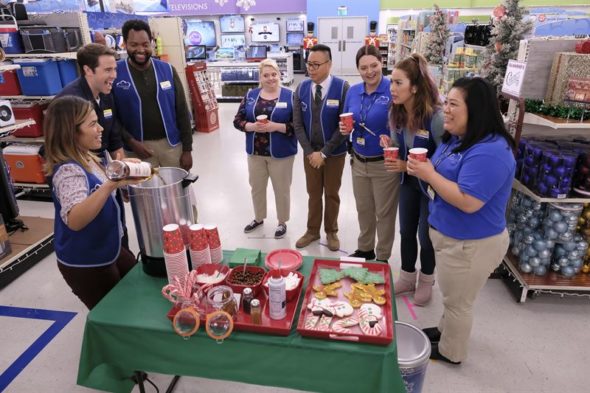 “ ‘Superstore’ is one of our signature NBC comedies, and we’re so pleased to be bringing it back for the 2018-19 season,” Salke said.

Said Pakosta: “This clever comedy, featuring America Ferrera, Ben Feldman and an incredibly talented ensemble cast, is a source of pride for the comedy team at NBC and I’m personally gratified that it has connected with audiences and critics alike.”

Season to date “Superstore” has grown +6% versus one year ago in adults 18-49 (1.7 rating) and +3% in total viewers (5.195 million), according to “most current” ratings averages from Nielsen Media Research. “Superstore” is also a potent performer on alternative platforms, growing to a 2.9 in 18-49 when 35 days of non-linear viewership is included in the rating. The series delivers a strong upscale audience, indexing at a 119 among adults 18-49 living in homes with $100K+ incomes (100 represents an average concentration of those homes).

“Superstore” was NBC’s #1 comedy across digital platforms in 2017, including the NBC app, Hulu and VOD.

Variety said the third season of “Superstore” is “character-driven comedy at its best” while Entertainment Weekly added the show is “at the top of its game.” Newsweek said the NBC sitcom “quietly nails Middle America’s story every Thursday night.”

“Superstore” centers around Amy (America Ferrera), the store’s most stalwart employee as well as the glue holding the place together. Jonah (Ben Feldman), who is often the target of his colleagues ribbing, is joined on the floor with his fellow associates, including sardonic Garrett (Colton Dunn), the ambitious Mateo (Nico Santos) and sweet teenager and new mom Cheyenne (Nichole Bloom). Overseeing the store is Glenn (Mark McKinney), the affable, clueless store manager, and Dina (Lauren Ash), the aggressive assistant manager who enforces Cloud 9 policy with an iron fist.

From the bright-eyed newbies and the seen-it-all veterans, to the clueless seasonal hires and the in-it-for-life managers, together they hilariously tackle the day-to-day grind of rabid bargain hunters, riot-causing sales and nap-worthy training sessions.

“Superstore” was created and written by Justin Spitzer, who also serves as an executive producer with director Ruben Fleischer, David Bernad and Gabe Miller & Jonathan Green. “Superstore” is produced by Universal Television, Spitzer Holding Company and The District.

What do you think? Are you still a fan of the Superstore TV series? Did you think it would be cancelled or renewed for season four on NBC?

Excellent news. One of the shows that actually makes me laugh. My guess is the other people who posted haven’t consistently watched the show.

Not necessarily at all. There are plenty of really good shows that have been cancelled that make this show look pathetic. However, the way things work now(and it isn’t a change for the better) the ratings for this show are good enough for renewal. Just for the record, no comedies make me laugh anymore. Most of them overwhelm you with stupidity. If they didn’t have the canned laughter, you might not find things so funny. Congrats to the Real Fans on the renewal.

Sorry I have to agree with Brian, So many good shows are canceled and others that should be they keep renewing.

Why do they keep renewing crap shows but cancelling the good ones, I have a theory MONEY how much does it cost to make the shows lol

Ah, you are obviously a laugh track show lover. Enjoy that terrible trend of shows.